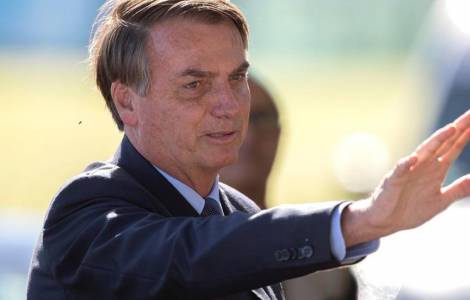 2020-09-10
Towards World Mission Day: the witness of the elderly and the sick is an indispensable force for missionary work

2020-09-07
Independence Day: "seeing the many riches that exist in our differences"

2020-07-28
"How much is life worth?": Awareness campaign to combat human trafficking

Brasilia (Agenzia Fides) - A group of 152 bishops from Brazil, about a third of the total members of the Brazilian Episcopal Conference, has published a "Letter to the People of God", in which serious criticisms are made to President Jair Bolsonaro for the way he has handled the covid-19 pandemic, but also the government's political orientation.
"Brazil is going through one of the most difficult periods in its history, comparable to a 'perfect storm' which, painfully, cannot be postponed. The cause of this storm is the combination of an unprecedented health crisis, with an overwhelming collapse of the economy and the tension that befell the foundations of the republic, caused in large measure by the president of the republic and other sectors of society, resulting in a profound political and governance crisis", says the document.
According to the note sent to Fides, the Bishops said that the draft would be presented to the executive committee of the bishops' conference in an already scheduled meeting Aug. 5. The letter, however, was leaked to the media July 26. "We are bishops of the Catholic Church, from various regions of Brazil, in profound communion with Pope Francis and his magisterium and in full communion with the National Conference of Bishops of Brazil, which in the exercise of its evangelizing mission, always places itself at the defense of children, justice and peace", reads the letter.
"It is within this horizon that we position ourselves in relation to the current reality in Brazil. We have no political, party, economic, ideological or other interests. Our only interest is the Kingdom of God, present in our history, as we move forward in building a structurally just, fraternal and supportive society, like a civilization of love".
"This scenario of dangerous deadlocks, which test our country, requires much more dialogue from its institutions, leaders and civil organizations than closed ideological speeches".
The bishops argue that "the current government system does not focus on the human person and the good of all, but on the uncompromising defense of the interests of an "economy that kills".
The document adds that "religion is also used to manipulate feelings and beliefs, provoke divisions, spread hatred, create tensions among churches and their leaders", warning that "any association between religion and power in the secular state is harmful, especially the association between fundamentalist religious groups and the maintenance of authoritarian power". (CE) (Agenzia Fides, 6/8/2020)

AFRICA/SOUTH AFRICA - Covid-19: marriages postponed until "it is safe to celebrate the Sacrament with freedom and festivity