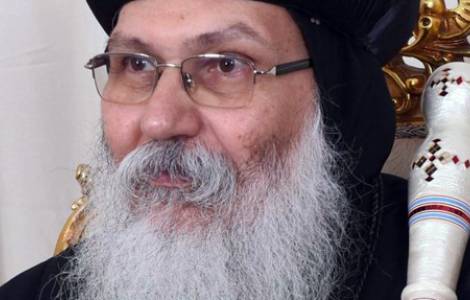 2020-09-15
Grand Imam of al Azhar: Islam and Christianity have never been at the root of wars

2020-07-28
The Monastery of St. Macarius commemorates Abbot Epiphanios, two years after his assassination

2020-07-18
Grand Mufti Shawki Allam: "There is no objection to building churches with Muslim money"

2020-07-16
Alarm of the Coptic Churches: there are those who give "false Bibles" and "false Gospels" contrary to the Christian faith

Cairo (Agenzia Fides) - The commemorations of Anba Epiphanios, Coptic Orthodox Bishop killed two years ago, on 29 July 2018, will take place on Wednesday 29 July at the Monastery of St. Macarius, in that monastery, where he was abbot. Only a few Bishops and the monks of St. Macarius will take part in the liturgical celebrations in memory of Anba Epiphanios: a limited number of people, in compliance with the regulations imposed by the authorities to counter the spread of the coronavirus pandemic (and which led to the suspension of the liturgical celebrations with the participation of the faithful in all the churches of the country, until next August 3). But in this case, the secrecy surrounding the commemoration certainly seems appropriate to commemorate a painful affair, which shocked many Egyptian Christians and opened anguished questions about the present and future of Coptic monasticism, given that just two monks of St. Macarius are been convicted of the murder, and a death sentence is pending on one of them.
In the early hours of Sunday 29 July 2018, the body of Bishop Epiphanios had been found in a pool of blood, inside the Monastery of St. Macarius, along the path that led from his cell to the church, where the Bishop was going to start the day with the morning prayers, before Sunday Mass (see Fides, 30/7/2018). The Abbot was 64 years old, a native of Tanta, a graduate in medicine, Anba Epiphanius had entered Saint Macarius the Great monastery, in Wadi Natrun region, in 1984, and was ordained a priest in 2002. Researcher and scholar, he had worked on the translation from Greek to Arabic of several books of the Bible. Anba Epiphanius lived intense relationships of spiritual communion with friends and monastic communities of the Catholic Church. Already in the days following the murder, the judicial authorities accused the Egyptian Wael Saad Tawadros of the crime, who at the time of the assassination was a monk of the Monastery of St. Macarius with the name of Isaiah al Makary.
A few days before his arrest, Wael Saad Tawadros had been expelled from the monastery and stripped of his monastic habit with a measure approved by the Coptic Orthodox Patriarch Tawadros II. Then, on August 3, 2018, on the wave of emotion caused by the tragic story of Anba Epiphanios, the Coptic Church had accelerated the process of critical discernment on the condition and conduct of monastic communities, which had already been underway for some time. The Committee for the monasteries of the Coptic Orthodox Holy Synod (see Fides, 6/8/2018) had laid down 12 rules - ratified by Patriarch Tawadros II - aimed at all those who live the monastic condition in the Coptic Orthodox Church should abide by. Monks and nuns were asked to close their personal accounts and any blogs on social media, considered with critical eyes as tools used above all to spread "confusing ideas". Pope Tawadros also ratified the order to suspend the acceptance of new candidates for monastic life for a year, and that of regulating in a more rigorous way visiting times and pilgrims to the monasteries. Among the 12 disciplinary measures there is also the prohibition for monks and nuns to receive donations from the faithful, who can only be collected by the abbot or abbess of the monastery.
The Supreme Court of Cassation of Egypt confirmed on Wednesday 1 July last the sentence of death sentence pronounced in previous judicial proceedings against Wael Saad Tawadros, former Egyptian Orthodox Coptic monk convicted of the murder by Anba Epiphanios, ( see Fides, 3/7/2020). The Court of Cassation instead sentenced monk Falta'os al-Makari to life imprisonment as an accomplice in the same crime, canceling the death sentence previously also imposed on him by the Damanhur Criminal Court.
The two previous death sentences had been issued by the Damanhur Criminal Court on February 23, 2019, and on April 24, 2019 they had received the nihil obstat from the Mufti of Egypt, the Islamic religious authority in charge of issuing the fatwas (legal opinions based on the Sharia) on relevant issues. In Egypt, a death sentence cannot be considered final unless approved by the Mufti. (GV) (Agenzia Fides, 28/7/2020)