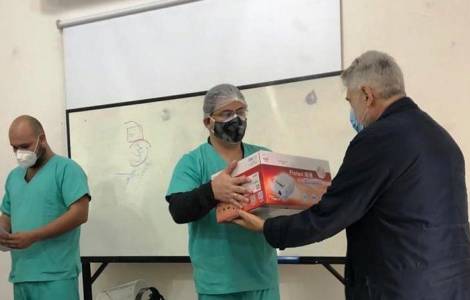 Vatican City (Agenzia Fides) - In many dioceses of mission territories, the serious consequences of the Covid-19 pandemic, of a health, social and economic nature, have added to already dramatic situations, as in the case of the Nigerian dioceses, which have asked for the help of the Emergency Fund established by Pope Francis at the Pontifical Mission Societies (PMS) to support the Churches of the mission countries in the face of the Covid-19 emergency (see Fides, 6/4/2020).
In the Archdiocese of Kaduna, the severe impact of Covid-19 has increased the suffering of the population already severely affected by terrorist attacks on Christian communities which caused deaths, injuries and numerous displaced persons, as well as a general climate of fear. Poor and vulnerable children suffer the most, who seek refuge in the parishes, but the priests do not have the material means to support them, since without Eucharistic celebrations they cannot even collect offerings for their daily sustenance. The aid sent by the PMS Fund will serve to support pastoral workers and staff employed in parishes, as well as purchase the health protection kits necessary to face the pandemic. In fact, in the last month there has been an increase in infections since many in the region refuse confinement and compliance with prevention rules, due to the high rate of illiteracy.
Even the diocese of Maiduguri in recent years has suffered heavy damage from the assaults by Boko Haram terrorist groups in which about 300 churches and pastoral centers, health centers and schools have been destroyed, leaving dead and injured as well as causing numerous displaced people. There are a large number of widows, orphans and internally displaced persons, which the diocese takes care of, facing further difficulties caused by the pandemic. Therefore help is needed for diocesan staff, medical staff, priests who assist communities in the most remote areas, and for the purchase of health protection material.
The diocese of Osogbo, a young rural diocese created in 1995, ordinarily derives the main means of support for its activities and for pastoral workers, from the collections during Sunday masses and from other offerings that come from the generosity of the faithful. Isolation has closed churches and stopped pastoral activities, so the diocese has tried to reduce or eliminate expenses, but despite this it needs external help to ensure minimal support for pastoral workers and religious communities.
The diocese of Ilorin also covers a rural area, mostly Muslim, where Catholics are just 4%, almost all peasants, farmers, small traders, with low education or illiterate. It is therefore extremely difficult, with the consequences of isolation, to ensure support for pastoral workers, who generously dedicate themselves to assisting and proclaiming the Gospel.
The faithful of the Archdiocese of Freetown, in Sierra Leone, like those of all the regions in which the closure of the churches has been decreed, in recent times have been able to participate in the mass only through radio and internet broadcasts. In this way, Christians who were unable to gather did not even have the opportunity to provide for the support of their priests, religious and catechists engaged in human promotion and the proclamation of the Gospel. In particular, it needs support for schools run by the Church, which carry out important training and education work for the younger generations.
Also in Latin America there are ecclesiastical circumscriptions entrusted to the Missionary Dicastery where the Church is not yet sufficiently developed for the particular local social and economic situations. In particular, the PMS Emergency Fund has sent aid to the Apostolic Vicariate of Puyo, Ecuador, which will be used in particular to support the health service for the Amazonian population, and to the Apostolic Vicariate of Beni, Bolivia, one of the most affected areas from the coronavirus. The population suffers not only from the constant danger of getting sick but also from the lack of economic resources. The Church distributes food and medicines to the most needy families, sharing a moment of prayer with them, always respecting the rules of health security. (SL) (Agenzia Fides, 9/7/2020)

ASIA/TAJIKISTAN - Job loss as a result of the coronavirus pandemic: Caritas helps returnees