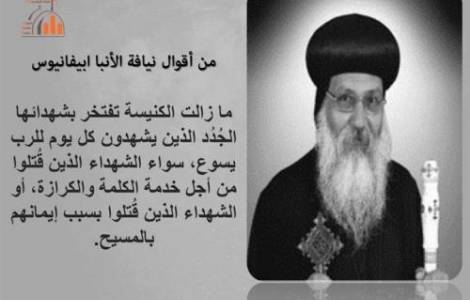 2020-10-12
Videoclip of children recalls the massacre of the "Martyrs of Libya". Coptic Bishop Makarios: "inappropriate choice"

2020-09-15
Grand Imam of al Azhar: Islam and Christianity have never been at the root of wars

Cairo (Agenzia Fides) - The Supreme Court of Cassation of Egypt confirmed on Wednesday 1 July the sentence of death sentence pronounced in previous judicial proceedings against Wael Saad Tawadros, former Egyptian Orthodox Coptic monk convicted of the murder by Anba Epiphanios, the abbot killed on 29 July 2018 at St. Macarius Monastery, in the Wadi Natrun region. The Court of Cassation instead sentenced monk Falta'os al-Makari to life imprisonment as an accomplice in the same crime, canceling the death sentence previously also imposed on him by the Damanhur Criminal Court.
The two previous death sentences had been issued by the Damanhur Criminal Court on February 23, 2019, and on April 24, 2019 they had received the nihil obstat from the Mufti of Egypt, the Islamic religious authority in charge of issuing the fatwas (legal opinions based on the Sharia) on relevant issues. In Egypt, a death sentence cannot be considered final unless approved by the Mufti.
The first double sentence of death sentence was immediately defined as "a catastrophe" by Anba Agathon, Coptic Orthodox Bishop of Maghagha. Bishop Agathon had immediately invited to pray for the two condemned.
The assassination of Bishop Epiphanios, abbot at St. Macarius Monastery, represented a real trauma for the entire Coptic community and in particular for the monastic environments. According to what was reconstructed during the investigations, disputes arose between the murdered abbot and the two condemned for economic issues and for several violations of the monastic rules by the two monks (one of whom, Wael Saad Tawadros, after the murder had been stripped of the monastic habit at the end of a long canonical process).
During the trial, the two accused continued to proclaim themselves innocent, and also retracted previous confessions of guilt which, they say, would were extorted through psychological pressure from the investigating bodies.
In the early hours of Sunday 29 July 2018, the body of Abbot Epiphanios (in the photo) was found by the monks lying in a pool of blood, inside the monastery, along the way that led from his cell to the church. It seems that the Bishop was hit on the head with a sharp, heavy object (see Fides, 30/7/2018). The Abbot was 64 years old, a native of Tanta, a graduate in medicine, Anba Epiphanius had entered Saint Macarius the Great monastery, in 1984, and was ordained a priest in 2002.
Researcher and scholar, he had worked on the translation from Greek to Arabic of several books of the Bible. Anba Epiphanius lived intense relationships of spiritual communion with friends and monastic communities of the Catholic Church. (GV) (Agenzia Fides, 3/7/2020)