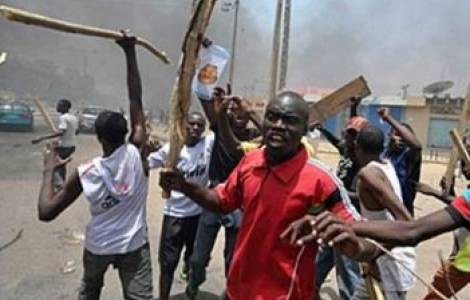 2020-07-07
Solidarity of the European Bishops with Nigerian Bishops: "No more violence against Christians in Nigeria"

2020-06-24
"Rape is repulsive, reprehensible and dehumanizing" says Mgr. Kaigama in the face of the increase in sexual crimes

2020-06-09
Covid-19, Archbishop Kaigama greets the reopening of churches: "Never forget the spiritual aspect in crisis like this"

Bauchi (Agenzia Fides) - "Boko Haram is only one of the serious problems. For some time now there have been severe clashes between Tivs and other ethnic groups such as Chamba and Kuetp. They fight each other for possession of land. Then there is an ancient conflict that characterizes our area, that between breeders (mostly Muslims) and farmers (generally Christians). There have been many deaths and many civilians have been forced to flee. If one adds the very frequent kidnapping phenomenon which, as in all Nigeria, is very pressing, you will realize how high the tension is". The Bishop of Bauchi, Mgr. Hilary Nanman Dachelem, explains to Fides the situation in the north-east and north-west of Nigeria, where violence has continued for more than a year, while the Church continues her work to welcome fugitives and promote dialogue and peace. Last April, tensions forced about 23,000 people to flee to Niger while the number of internally displaced persons seeking shelter from attacks perpetrated by armed groups, in improvised camps or at religious structures, is multiplying. The intertwining of interests and activities of terrorist or ethnic groups, as well as the ancient rivalries between breeders and farmers, make the area a real powder keg.
"My diocese - explains the Bishop - is located in the north-east of the country and gathers two States, Bauchi and Gombe. In all, 10 and a half million people live there. The majority is of Islamic faith (90%), for the other 8% are Protestant and 2 are Catholic. Since 2009 the whole area has been characterized by the presence of Boko Haram and its terrorist attacks. It is estimated that thousands of people have been killed and more than 3 million displaced. As you know, any type of education that is not strictly Islamic is prohibited for Boko Haram. The children, at a very young age, are sent to Koranic schools in other cities and entrusted to fanatic and certainly unskilled teachers. This perpetuates their vulnerability and increases their illiteracy rates". The protagonists of the area's permanent state of tension are not only jihadist terrorists. The lethal mix of ethnic or socio-economic clashes is reaping victims and triggering mass exoduses.
Churches are very active in the field of hospitality and dialogue. There are also several cases of interreligious collaboration in order to promote peace and save lives. "Some refugee camps are directly managed by the Churches. One of the most striking cases concerns Saint Patrick's Cathedral in Yola, in the State of Adamawa (far east, ed). There, Bishop Stephen Dami Mamza hosts over 800 people in the perimeter of the cathedral itself". The Church then became the protagonist in the role of advocacy and facilitator of social and religious dialogue: "We often organize meetings, workshops or conferences - concludes Mgr. Hilary Nanman Dachelem - for the purpose of promoting peaceful encounter. Last year, for example, in Jos, we convened a conference attended by all the priests of the north-central area of Nigeria together with representatives of various ethnic groups, to talk about ethnic conflicts and promote peaceful exchange. Our excellent relationships with other faiths are a viaticum to help ease tension and prevent clashes". (LA) (Agenzia Fides, 30/5/2020)

AFRICA/MOZAMBIQUE - Wave of IDPs in the northern province, caused by violence and destruction

AFRICA/NIGERIA - Bishop of Bauchi: "Leave politics aside. Bring the abducted girls back home",