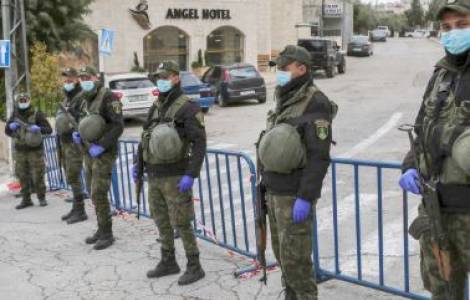 Jerusalem (Agenzia Fides) - "The heartfelt invitation of the Holy Father to end armed conflicts around the world has been greeted with great joy and hope by Israelis and Palestinians, who have long been waiting for a moment of lasting peace. There are currently no clashes, but a state of deep mistrust remains between the two populations". This is what Fr. Amjad Sabbara, belonging to the Order of Friars Minor (OFM) and parish priest of the Latin Church of San Salvatore in Jerusalem, reports to Agenzia Fides about the appeal to the "global ceasefire" launched by the UN Secretary General Antonio Gutierres, and officially supported on 29 March, by Pope Francis, while the world faces the crisis of the Covid-19 pandemic.
A year after the political elections in Israel, the executive, which in this time frame had not been able to reach an agreement within the time allowed by law, is about to exit the impasse: on April 20, 2020, in fact, outgoing Prime Minister Benjamin Netanyahu and his main political opponent Benny Gantz, reached an agreement to form a national emergency government, also driven by the condition of uncertainty triggered by the world pandemic. Against the backdrop of this new political situation, the front of the conflict experienced many episodes of upsurge in the last months of 2019. Especially in Gaza, where tension has increased again: on the one hand the balloon bombs and rockets, launched by the Strip in the desert from Negev, sometimes hit Israeli civilian buildings; on the other hand, the harsh response of the Jewish state, with its air raids.
The situation in Gaza continues to be dramatic: the Israeli naval embargo has deprived about 4,000 Gaza fishermen of their only source of livelihood. Even in Jerusalem tension periodically rises again. At the center of the question is, once again, the Esplanade of the Mosques, which has become the scene of incursions by fundamentalists linked to messianic movements.
To this difficult situation is added the ongoing medical emergency: in the Jewish state, to date, there are over 15,800 confirmed cases of coronavirus, with 215 deaths. In the Palestinian territories the infected have exceeded 500. And the numbers seem destined to rise. In this time of restrictions, the support of the parish priests of the Custody of the Holy Land comes "with a series of initiatives that we have put in place to continue to take care of our parishioners", explains the Franciscan religious. "This year in Jerusalem - Father Sabbara says - after the Easter vigil that takes place in the Holy Sepulcher on Saturday morning, we commissioned some scouts to bring the holy light to the houses of the Old City. It was an unexpected joy for many faithful who were able to light a candle with holy fire". The friars who work in the Latin parish of San Salvatore set up a small committee of faithful, where everyone carries out his or her own task, such as: video catechesis for the childeren who are preparing for their confirmation or telematic appointments with the Franciscan youth every two weeks . "With the help of our emergency committee - the parish priest of Jerusalem underlines - we are assisting many families in difficulty. It is not easy for many to stay at home, in often inadequate spaces and in situations of economic uncertainty".
The Franciscan knows the situation well: during the so-called second Intifada he was present in the siege of the Nativity of Bethlehem (from April 2 to May 10, 2002) and was involved in negotiations to find an agreement with the 240 Palestinian militants who had taken refuge in the Basilica to escape capture by the Israeli army. "What we hope for - concludes Father Amjad - is that we will finally reach a fair solution, which respects the dignity and security of both peoples, Israelis and Palestinians". (ES-PA) (Agenzia Fides, 30/4/2020)

EUROPE/BELGIUM - Bishops' letter: in the time of pandemic, Christians have "a hope to offer to the world"

ASIA/MALAYSIA - Covid-19 emergency: churches reopen for worship, but with some exceptions