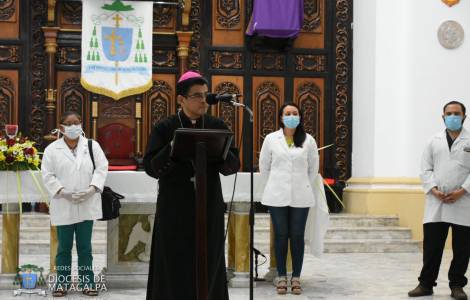 2020-06-01
"Living charity and a people-based economy", the voice of the Church on the feast of Pentecost

2020-05-26
The Bishops: "We urge rulers and all sectors of the country to seek and find alternatives and solutions"

Matagalpa (Agenzia Fides) - The Ministry of Health has prohibited Mgr. Rolando Álvarez, bishop of the diocese of Matagalpa, from creating a medical prevention project in the face of the spread of covid-19, which should have started this week, as reported in his messages on social networks.
This initiative of the diocese aimed to carry out information campaigns on coronavirus, medical consultations over the telephone and evaluations in six medical places should have been inaugurated in the municipalities of Matiguás, Sébaco, Esquipulas, Tuma and in the city of Matagalpa.
"MINSA (abbreviation of the Ministry of Health) has just informed me that I cannot implement the project of the Medical Prevention Centers, not even the call center. I want to tell the people that as dioceses we wanted to work for the health of our people", the religious reported on his Twitter account.
The Bishop's complaint takes place at a dramatic moment for the people of Nicaragua because it is the only country in the entire American continent that has absolutely no national measures against the world pandemic. There is even a lot of confusion and chaos at a political level after the Minister of Health was dismissed for having convened a press conference where she never turned up.
The executive director of the Civic Alliance for Justice and Democracy, Juan Sebastián Chamorro, also denounced that the country is experiencing a lack of leadership at a crucial moment. According to the note sent to Fides, Chamorro made these statements because President Ortega has canceled all public presence for more than 25 days, and in the face of this absence as head of state, social groups, entrepreneurs and the Catholic Church are organizing to help the population.
One of the initiatives that several doctors from the Matagalpa area joined was that of the diocese of Mgr. Rolando Álvarez. At the press conference, he said that a preventive measure was planned, given the fact that "the Nicaraguan government has not adopted restrictive measures, recommended by WHO, to prevent contagion".
In this regard, Archbishop Álvarez said that MINSA, the Ministry of Health, has notified the existence of five positive cases across the nation. From this figure, the prelate said, experts estimate that in the next few days there would be an increase in the number of infected people, which could correspond to 30 percent of the population, of which 10 percent would require medical treatment, and four percent would be in critical conditions.
For this reason, the prelate expressed his concern and considered the creation of this medical center of vital importance in order to take drastic measures and "reduce the contagion curve and avoid the collapse of the health system". (CE) (Agenzia Fides, 7/4/2020)

AMERICA/UNITED STATES - "Cutting the roots of racial injustice that infects many areas of society": letter from CELAM to American Bishops