AMERICA/BRAZIL - Servants of Maria Riparatrici: "For a hundred years in the Amazon at the service of God and humanity" 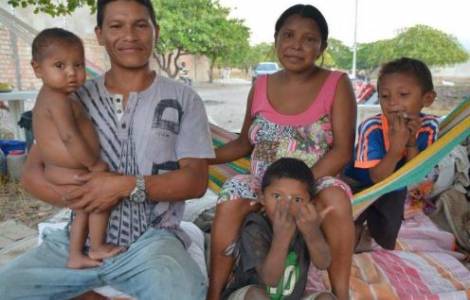 2020-06-01
"Tempo de Cuidar": aid campaign for the most vulnerable people during the Covid-19 crisis

Sena Madureira (Agenzia Fides) - "The Servant Sisters of Maria Riparatrici who operate in the Amazon region of Alto-Acre, Brazil, continue to offer pastoral service, the reception of girls who want to consecrate themselves to the Lord, school education and visits to the agglomerations of houses in the forest. Our communities also work hard to animate evangelization groups and couples, catechesis and liturgy, support for marginalized children and vocational pastoral. Participating in this apostolic mandate and moved by the Spirit, our congregation responds to the call to follow Jesus Christ to witness the Gospel in fraternal communion and to be at the service of God and man, constantly drawing inspiration from Mary, Mother and Servant of the Lord". This is what Sister Augusta de Oliveria, Vicar General of the Servant Sisters of Maria Riparatrici, says in an interview with Agenzia Fides, recalling that in 2021 the 100 years since the beginning of their missionary adventure in the Latin American country will be celebrated: "November 14, 1921 - says Sister Augusta - after more than four months of travel, five sisters and a postulant arrived in the Sena Madureira, located in an area bordering Peru and Bolivia. The nuns - she continues - were sent by our founder, mother Maria Elisa Andreoli, at the invitation of Bishop Prospero Bernardi, of the Order of the Servants of Mary who a year earlier, in 1920, had founded a mission in that area".
Over the decades, the missionary commitment of the Servant Sisters of Maria Riparatrici in this part of the Amazon has contributed to improving the living conditions of local populations, creating colleges, hospitals, orphanages and other social works inspired by the values of fraternity, "through a relationship that helps build trust and friendship as a basis for the human and spiritual growth of people", explains the vicar general.
The service of the Congregation is characterized, in fact, for its commitment above all in the education sector and in the welfare and health sector: "In the Xapuri community, for example, - reports Sister Augusta - we coordinate a kindergarten, subsidized by the government and with lay staff, which welcomes more than 170 children, from two to four years of age, to give mothers the opportunity to go to work. Here, moreover - she continues - the nuns follow the 'Hands of woman' cooperative, where useful household items are made with the aim of helping families made up of women and children only. In Cruzeiro do Sul, a border town, with more than half of the inhabitants made up of Indios, there is a hospital where we provide medical and health care".
"Today - the religious points out - we intend to celebrate this first missionary centenary in communion with the local Church: all our communities are invited to reflect on the theme of inculturation of the evangelizing mission: "As the Holy Father writes in the apostolic exhortation 'Querida Amazonia'- clarifies the missionary - the Church in the Amazon is called to walk with the peoples who live there and therefore to take on an 'Amazonian face'. But for this incarnation to take place - she continues - it is necessary that the proclamation of the Gospel is understood in this context: it is important to ensure a greater presence of priests in the area. This challenge appears as an identity factor - observes Sister Augusta - which could make meaningful experiences possible, determine a daily experience, arouse new hopes for the future. In our missionary experience - she concludes - what emerges clearly is the thirst that people have to know the word of God".
The Servant Sisters of Maria Riparatrici were born in 1900 in Vidor, in the province of Treviso, with the religious profession of Elisa Andreoli, of her mother Margherita Ferraretto, Agnese Vimercati and Carmela Regonesi, as secular tertiaries of the Servants of Mary. In Brazil the congregation is present with two Provinces: "Nossa Senhora de Guadalupe" and "Nossa Senhora Aparecida"; the former belong to the communities of the north of the country, those of Argentina, Bolivia and Mexico, while the latter have been assigned the communities of the south-central and Peru. (ES) (Agenzia Fides, 29/2/2020)