AFRICA/IVORY COAST - Land grabbing, the Bishops: "We need a legally binding instrument to regulate the activities of transnational corporations" 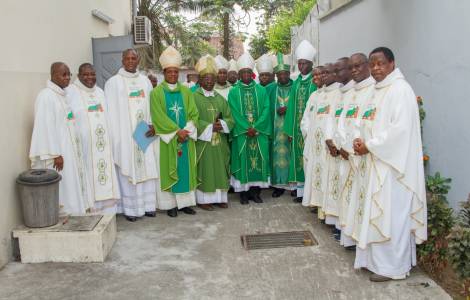 2020-04-03
Coronavirus: an appeal for universal solidarity from the President of the Episcopate

2020-03-26
Coronavirus: in the face of the suspension of Masses, a parish priest in the streets with the Blessed Sacrament

Abidjan (Agenzia Fides) - "We strongly denounce the land grabbing and forced expropriation of land in all its forms. The consequences are incalculable: Loss of cultural and ancestral heritage, displacement, unemployment, famine, exodus, migration, etc.", say the Bishops of the Standing Committee of the Union of Episcopal Conferences of West Africa (CERAO/RECOWA), in the statement published at the end of their meeting held in mid-February in Abidjan.
To the "States, companies, multinationals, and to all those involved in this disastrous operation of land grabbing and forced expropriation of land in Africa", the Bishops ask to listen to the word of God: “Do not strip the weak; he is weak! And do not crush the humble man injustice” (Pr 22,22).
In addition to "the phenomenon of land grabbing by multinationals with the connivance of certain local actors", the Bishops denounce "the forced expropriation of land of farmers by herders for grazing purposes. We are also witnessing the manhunts, villagers who are sent parking from their homes and their farmlands destroyed. This leads to the loss of human lives".
"Despite what can be said of the economic benefits of mineral extraction in Africa, it should be noted that its harmful effects are incalculable for the African peoples", says the message. Among the harmful effects there is: degradation of the environment, imbalance of the ecosystem, loss of biodiversity, pollution of rivers, seas, water tables, etc.
The Bishops of West Africa therefore call for "the establishment of a global, legally binding instrument to regulate the activities of transnational corporations. We ask our respective governments in West Africa to work collectively with other Countries for the realization of such an instrument for peaceful global governance".
"Let us, therefore, work together for a new world order which guarantees the different communities of West Africa the right to an environment that promotes sustainable development, which respects nature and natural resources. Following the Holy Father, we invite the governments of West Africa to «correct the growth models that seem incapable of guaranteeing respect for the environment» and the rights of communities", concludes the declaration. (L.M.) (Agenzia Fides, 25/2/2020)

AFRICA/DR CONGO - Covid-19: fears of a catastrophe in prisons if no action is taken in time

AMERICA/UNITED STATES - Message of the Bishops to the people of God: "Christ is not quarantined and his Gospel is not in chains"