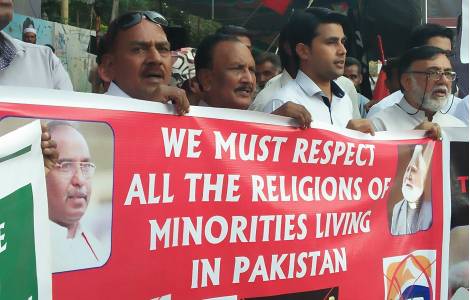 Karachi (Agenzia Fides) - It is necessary to develop a new national culture to make Pakistan more tolerant and inclusive for the followers of all faiths: this is what civil society activists emphasized during a seminar organized in recent days in Karachi by "Center for Social Justice" (CSJ) to discuss religious freedom and human rights in Pakistan in light of various legal aspects.
As Agenzia Fides learns, students, activists, NGO members, politicians and leaders of religious minorities took part in the discussion, underlining the need to foster interreligious harmony in the country and highlighting the obstacles regarding respect for human rights in Pakistan.
"Despite having numerous laws in the Constitution that guarantee social, cultural and religious freedom for minorities, membership and respect for those laws remain limited", said CSJ executive director, the Catholic Peter Jacob. "In general, religious freedom is unquestioned at a legal level - he remarked - but a broad national narrative should be created to really promote it in the social life in Pakistan".
Jacob continued: "We need another 'Paigham-e-Pakistan' (a public statement from the government, ed), with all the parties involved, including civil society, minorities, women, educators and students, to develop this narrative. Some of the problems we face are the result of religious challenges. It is necessary to develop a consolidated voice to make Pakistan more tolerant and inclusive", he said.
Mahnaz Rahman, woman leader of the "Aurat Foundation" reiterated: "The founder of Pakistan, Ali Jinnah, dreamed of a country in which all the components in society were included and with equal rights. Religion is a personal choice and should be respected", she said, tracing the concept of "citizenship" as a key idea for everyone, regardless of social status, culture, belief, without discrimination.
The founder of the "Interreligious Commission for Peace and Harmony", present at the seminar, Islamic leader Allama Muhammad Ahsan Naqvi reiterated his desire for "unity with our Hindu and Christian brothers", adding that he is "at the forefront of safeguarding their rights". And he said: "It is essential that we all do out part for the prosperity of the country, expelling those who sow hatred to divide us".
Those present, like prof. Riaz Shaikh, professor at the University of Punjab, recalled the importance of article 20 of the Constitution of Pakistan, which deals with the rights of Pakistani citizens, stating that "an inclusive model is essential to bring the country out of darkness".
"Self-criticism is vital in order to address the problem. There must be a reason why, since the foundation of Pakistan, the number of non-Muslims has been reduced from 25-30% to a mere 3%", he said. "We must recognize that religion has been used in our society as a tool to resolve disputes and obtain benefits. Intolerance has become a huge problem, difficult to deal with".
The exponents of religious minorities, Hindus and Christians, have reiterated that they "fully feel Pakistani," and of "wanting to be accepted as Pakistanis because this country is our home". (PA) (Agenzia Fides, 14/10/2019)

AMERICA/COLOMBIA - "It is time to help": the Church continues to work for the most vulnerable