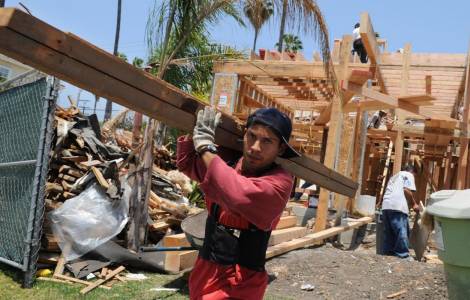 Jackson (Agenzia Fides) - There is dismay, fear and confusion among many Latin American families in the State of Mississipi (United States) after the police raid left dozens of children without parents on August 8.
In a video sent to Agenzia Fides, which became viral on social media, Magdalena Gómez, 11, appears in front of the cameras saying in English: "Government, please, show a little heart". She says this because her father was arrested on Wednesday along with hundreds of people after more than six hundred Immigration and Customs Enforcement Service (ICE) agents launched a large police operation in Mississippi.
Until yesterday, state officials, lawyers and defenders of migrants did not know where the children had been sent, after their parents had been arrested or who had been entrusted with child custody.
According to the latest information, US agents in charge of immigration and customs control arrested 680 people employed as workers in food industries in Mississippi. In a message to Agenzia Fides, the Catholic Bishop of the diocese denounced the incursions as a "man-made disaster": "The vast majority of these people are our neighbors. They are not criminals. They are hard-working people", said Mgr. Joseph Richard Kopacz of the diocese of Jackson, Mississippi.
The raid on 7 August, carried out by over 600 agents from all over the country, arrested most of the Latin American workers in seven companies in Mississippi due to violations of immigration legislation. It has been the most massive operation of its kind for over a decade.
Bishop John Stowe of Louisville criticized the raid. "While the nation is still grieving, especially the vulnerable immigrant population, ICE separates more families with huge raids", he said. "This cruelty must end".
Agenzia Fides also received the testimony of some parish priests who learned of the arrest of their faithful.
Father Mike O'Brien, parish priest of the Catholic Church of the Sacred Heart of Jesus in Canton, said he visited the parishioners whose families had been arrested. "All the people are afraid", he said. "Their doors are closed".
Meanwhile, family and friends went to look for children who suddenly found themselves alone because their parents were in custody, O'Brien said. Mgr. Kopacz said that the diocesan community will be active in all the parishes to understand and provide what families need. In fact, the families who have lost jobs or breadwinners will face increasing financial hardships in the near term. "As time goes on this month, there is going to be some real crises. We will give our contribution", said the Bishop. (CE) (Agenzia Fides, 10/08/2019)