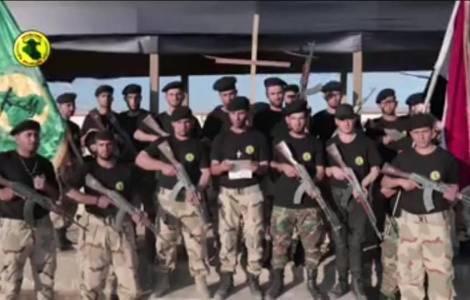 2019-12-04
Chaldean Patriarchate: no decorated Christmas trees, no celebrations, out of respect for the victims

2019-11-26
Chaldean Patriarch Sako praises the pro-demonstrators position of the Ayatollah al Sistani: a "quick solution" to the crisis is needed

2019-11-11
Chaldean Patriarchate: three days of fasting to call for peace to return in Iraq

2019-10-02
"Come and see". The Chaldean Patriarch inaugurates the Extraordinary Missionary Month in Iraq

2019-09-02
Street theater among the ruins of Mosul, to tell the difficult condition of Christians

Baghdad (Agenzia Fides) - The Chaldean Church officially reaffirms its disapproval and its clear distancing from the formation and work of armed groups of the so-called "Christian militias". With an official declaration by the Chaldean Patriarchate sent to Agenzia Fides, it is stressed that the very idea of forming "Christian" armed militias "contradicts Christian spirituality" aimed at nourishing feelings of love, tolerance, forgiveness and peace. The pronouncement of the Chaldean Patriarchate reminds young Christians that want to contribute to the security and defense of the State, the opportunity to enlist in the ranks of the official Iraqi army or of the federal police.
For the inhabitants of the autonomous Region of Iraqi Kurdistan, the possibility of joining the Kurdish Peshmerga militias is also indicated as legitimate. "Respect" is also expressed for the personal choice of those who decide to adhere individually to the so-called "People's Mobilization Forces" (al Hashd al Shaabi, predominantly Shiite paramilitary militias who fought against jihadists of the Islamic State) or to military in political groups, but all legitimacy is denied to those who claim to have created self-styled Christian paramilitary "brigades".
The clear statement of the Chaldean Church takes its cue from the decree issued by Iraqi Prime Minister Adel Abdul Mahdi on 1 July 2019, a provision which asked the independent paramilitary militias to close their offices in urban centers and to make a clear choice between the option of continuing to operate as armed local security groups and that of becoming political forces, accepting in this case to also close the offices of direct management of economic activities. The declaration released by the Chaldean Patriarchate expresses appreciation and support for the decree ordered by the premier, calling it "an important step" that goes "in the right direction", aimed at guaranteeing the State the exclusive use of arms and strengthening national and regional institutions.
The government decree issued on July 1 aims to limit the growing influence of Shiite militias in large areas of the country, their flourishing economic activism and the control they exercised over checkpoints scattered in some northern Iraqi provinces.
Shiite militias operating in Iraq have ties with Iran and the Lebanese Shiite Hezbollah party. According to reports by international media and observers, because some of the armed groups have ties to Iran, Prime Minister Adel Abdul Mahdi has been under pressure to move against them from the United States and some Arab countries that fear Iranian influence in Iraq.
Already in March 2018, Mr. Mahdi’s predecessor, Haider al-Abadi, tried to chip away at the militias’ independence by formally making them part of the country’s security forces. But they have remained largely independent.
According to some estimates, the militiamen organized in the Popular Mobilisation Forces reach 140,000 fighters. Abdul Mahdi has indicated next 31 July as the time limit within which the militias must align themselves with the indications contained in the decree issued at the beginning of the month.
The distancing of the Chaldean Church from self-styled "Christian militias" seems to apply in particular to the so-called "Babylonian Brigades", led by Ryan al Kildani (Ryan "the Chaldean"), a paramilitary formation born in the years in which large parts of Iraqi territory were being conquered by Daesh jihadists. The Babylonian Brigades have always claimed their label of anti-Daesh militia composed of Christians, although their organic connection with Shiite militias such as the Hashd al Shaabi units was documented. In recent years, the Babylonian Brigades have also assumed the configuration of a political party, presenting themselves as "Babylon Movement" in the Iraqi elections in May 2018, an electoral round in which they also obtained a fair affirmation, winning two of the five parliamentary seats reserved for Christian minorities. After the elections (see Fides, 17/5/2018), critical voices against the unscrupulousness of the Babylon Movement accused the political formation of having prevailed thanks to the votes received also by Shiite voters. In recent days, as reported by Agenzia Fides (see Fides, 20/7/2019), Ryan al Kildany also appears on the list of four Iraqi exponents hit ad personam by sanctions imposed by the US Treasury Department. The four exponents have been accused by the US Administration of corruption, theft of public money, abuse of office for personal interests and violation of human rights.
In particular, according to what was reported by satellite television networks, Ryan al Kildani is accused of being involved in the abusive appropriation of agricultural land in the Nineveh Plain, and of guiding paramilitary groups who with their presence on the territory are actually hindering the return of tens of thousands of displaced people, who fled from the region that fell under the control of the Islamic State (Daesh) jihadists in 2014. (GV) (Agenzia Fides 25/7/2019)

AFRICA/NIGER - Attack against soldiers on the border with Mali; according to a Bishop, the jihadists intend to occupy the Sahel region

ASIA/LEBANON - Maronite Bishops to Lebanese politicians: do not drag the country into the conflicts that are stirring the Middle East