ASIA/PHILIPPINES - "A climate of intimidation in society towards the opposition, mass media, the Church" 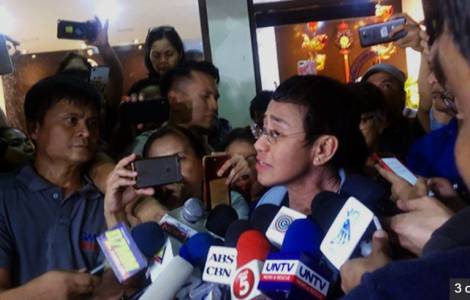 2020-06-02
Unemployment and new poverty: lockdown due to the pandemic has a serious economic and social impact

Manila (Agenzia Fides) - "The climate in society is rather intimidating and many today are afraid of even talking and expressing dissent towards President Duterte: the episode of the reporter, Maria Ressa and the news portal 'Rappler' is indicative of the situation. The current government seems to want total control of the country, as the Bishops have said, and the critical voices are silenced even with violence: in particular the political opposition, mass media and the Church": says to Agenzia Fides Combonian missionary Antonio Carlos Ferreira, who in Quezon City (Manila) is the Director of the Catholic magazine "World Mission", a monthly magazine that, with its 7,000 copies distributed throughout the nation, investigates and talks about the missionary dimension and the challenges of evangelization for the Catholic Church in the Philippines.
"Rappler's case is symbolic: Rappler is an unpopular organ to the government because, with its excellent work of investigative journalism, reports, with data and stories, the war against drugs launched by the government and talks about the thousands of extrajudicial executions" , explains the missionary.
Maria Ressa, nominated in 2018 by the American weekly "Person of the Year" was arrested in her office in Manila for "defamation" and then released on bail. "She was retroactively charged according to a law that punishes crimes on the web, but approved two years after the allegedly defamatory article", notes Fr. Carlos.
"What is urgent today in the country is a widespread awareness of consciences about this situation that, little by little, is eroding freedoms and creating a climate of fear in society, but it should be noted that the population seems not to take these factors into account and still gives Duterte strong and unconditional support", the missionary concludes.
The allegations to Ressa refer to an article written in 2012 together with the former Rappler reporter, Reynaldo Santos Jr., on alleged links between a businessman, Wilfredo Keng, with drug trafficking and human trafficking. The information website Rappler has repeatedly criticized President Duterte with inquiries and articles especially on the repression of traffickers and on the "crusade against drugs" ordered by the president, which has caused 20 thousand deaths (data of the NGOs) in two years, between alleged drug dealers and consumers. The website also risks closing down for previous accusations of tax evasion. (PA) (Agenzia Fides, 14/2/2018)

AMERICA/VENEZUELA - Assembly of the Episcopal Conference, in a virtual way but with an analysis of the reality of Venezuela

AFRICA/IVORY COAST - Peace, reconciliation and social cohesion: challenges ahead of the presidential election

AMERICA/BOLIVIA - "We must know if this government is interested in life", asks Mgr. Centellas on Journalist's Day