ASIA/PHILIPPINES - Government anti-drug campaign: the Church's commitment to the rehabilitation of drug addicts 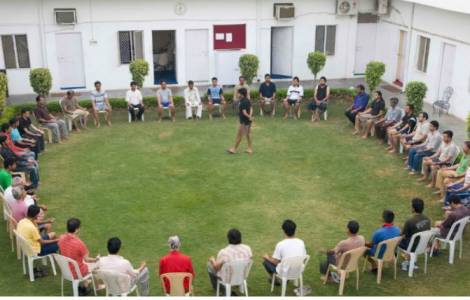 2020-05-20
After Covid-19, a "green change" in the economy is urgently needed, starting from agriculture

2020-05-13
Covid-19: reduced sacramental life, the Church of Manila hopes for the reopening of churches and strengthens online services

Manila (Agenzia Fides) - Father Luciano Airel Felloni, an Argentinian missionary who has lived in the Philippines for twenty years, has started a serious effort to rehabilitate drug addicts and lead them to live a meaningful and dignified life in his parish in the diocese of Novaliches, near Manila. This is the approach that the Church in the Philippines proposes in response to the "anti-drug" campaign launched by Filipino President Rodrigo Duterte who, since his election in June 2016, has mobilized law enforcement agencies to solve the problem of drugs in the country in a violent way. The government's strategy, based on fear and the action of law enforcement, is highly criticized: since the beginning of his presidency, on average 33 people have been killed by the police (over 4,500 suspected drug addicts in total), but there are another 23,500 extrajudicial killings, carried out by squadrons of "vigilantes". The vast majority of victims are poor, who cannot afford private rehabilitation programs.
Many priests and religious throughout the country, such as Fr. Felloni, have undertaken rehabilitation and recovery programs for drug addicts. Some communities are trying to fill the gaps due to the government's failures. In September 2016, Father Felloni, while the number of drug suspects killed in his community continued to rise, began working with local civil leaders, starting an outpatient recovery program in his parish.
"We asked ourselves what we could do in our small way to help a campaign against drugs, but working in the right way, in defense of the dignity of every person, and of the community", explains Fr. Felloni to Fides.
Initially, the project had to deal with the police’s hostility and the skepticism of drug addicts. Within a year, the enrollment of the persons under treatment increased to 40 and confidence began to increase.
Father Felloni's commitment is to reintegrate former drug addicts into society, helping them to "live a good life".
The Catholic Church in the Philippines has repeatedly urged the government to change its approach to the "war on drugs": instead of killing, the right path is rehabilitation, recovery and reintegration in the social fabric of people who have fallen into the trap of addiction, said the bishops. (SD) (Agenzia Fides, 10/8/2018)

ASIA/PHILIPPINES - "Happiness and sadness together", after the cancellation of the accusations against the bishops

ASIA/KAZAKHSTAN - New Caritas projects for the elderly and drug addicts

AMERICA/ARGENTINA - "Affirming certainties and strengthening commitments": Mgr. Lozano at the Te Deum for the 210 years of independence

AFRICA - Africa Day: a hard-working, fair and stable Africa is reborn from the Covid-19 crisis

ASIA/INDONESIA - Catholic volunteers at work to fight the "infodemic"

AFRICA/MALAWI - "No to political violence": religious leaders condemn the massacre in Lilongwe