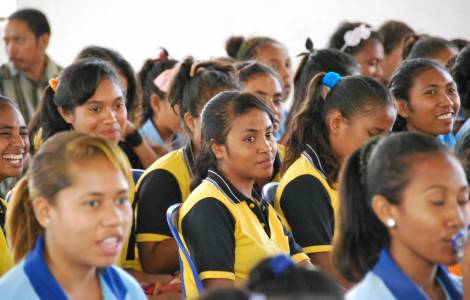 2019-10-23
Extraordinary Missionary Month: the Word of God is at the center of the mission

2018-05-15
Catholics: "A new government for economic and social development"

Dili (Agenzia Fides) - A coalition of opposition parties, including the one led by historic leader Xanana Gusmao, is ahead after the political elections held on 11 May in East Timor. The Alliance for change and progress (AMP) leads with 34 seats in Parliament, which has a total of 65. The Alliance, a coalition of three parties, presented itself against Fretilin, party of former Prime Minister Mari Alkatiri.
"If the AMP obtains a simple majority, the political impasse in the country would end", commented to Agenzia Fides Acació Pinto, sociologist and Catholic analyst from Dili.
The small nation of Southeast Asia has been characterized by a political stalemate in recent years. In the 2017 elections, in fact, Fretilin's party had won only 0.2% of the votes compared to the opposition and formed a minority government. East Timor president Francisco Guterres dissolved Parliament earlier this year and called for new elections, the fifth round since independence, which took place in 2002.
Over 700,000 Timorese citizens registered to vote in the country, which has a slightly smaller territory than the Hawaii and is home to 1.2 million inhabitants, over 90% are Catholics.
The Catholic Church gave its contribution in the electoral operations in order to guarantee a transparent and peaceful vote, sending over 900 observers to polling stations, 70% located in villages or scattered around the countryside
A former Portuguese colony, East Timor was annexed by Indonesia in 1975 and acquired independence after the referendum, supervised by the UN in 1999. The youngest Asian democracy is on the path to alleviate poverty, eliminate corruption and develop its rich oil and gas resources. The energy sector accounted for around 60% of the GDP in 2014 and over 90% of public revenues. About 60% of the population of East Timor is under 25, while according to the World Bank, around 40% of the population lives in poverty. The new Premier will be officially presented in two weeks. "People ask the new executive investments for transport and infrastructure, roads, drinking water, education, health care, employment for young people", notes Pinto. (SD) (Agenzia Fides, 15/5/2018)