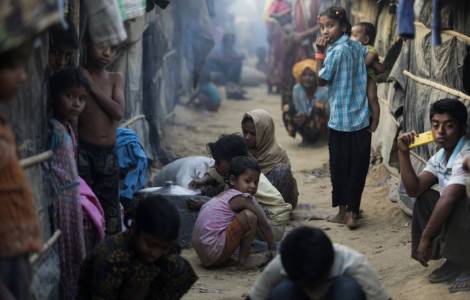 2023-01-18
The army destroys a Catholic church in the Archdiocese of Mandalay; the Chapel of Adoration remains standing

2022-12-16
Escalation of civil conflict, restrictions on humanitarian aid and accommodation in Buddhist monasteries

Yangon (Agenzia Fides) - More than 1.4 million people are displaced in Myanmar due to the ongoing civil war across the country. Armed clashes, related to the enforcement of strict security measures, restrictions on access and threats against humanitarian workers, are increasing and continue to hamper humanitarian efforts across Myanmar, according to the UN Office for the Coordination of Humanitarian Affairs (OCHA).
Fighting is taking place in several regions of the country, from which the civilian population is also suffering greatly. That's why aid agencies are hoping an informal ceasefire agreement between the Arakan Liberation Army and Myanmar's armed forces will provide much-needed aid in Rakhine and Chin states, to which access has been restricted since September.
Aid workers, meanwhile, are concerned about the recently passed, very restrictive new NGO Registration Law, which will have a negative impact on IDPs. The Law on Registration of Organizations, which has been in force since the end of November, limits the possibilities of local associations to work with international partners. Many local NGOs will not register because they do not want to give legitimacy to the military junta. However, failure to register prevents them from doing humanitarian work and carries a penalty of up to five years in prison and a fine of nearly €2,500.
However, since the international organizations depend on local partner organizations for a large part of their activities and projects, it will be much more difficult to provide humanitarian aid independently. The military junta already has an extensive list of civil society groups classified as "terrorists" and may expand that list to further restrict the flow of international aid.
Meanwhile, "rising commodity prices, including food and fuel prices, are exacerbating socio-economic pressures on communities, both in the remote areas and in the city," according to observers in Myanmar.
"Current humanitarian assistance is largely inadequate," the report said. It depends on the cessation of hostilities between the army and ethnic militias and the People's Defense Forces (PDF), which began after the February 2021 coup. "Frequent and indiscriminate attacks, including air strikes and artillery attacks on civilian areas, are causing casualties and widespread fear among civilians. Displacement continues to increase", say some religious contacted by Fides.
According to the United Nations, an estimated 31,000 civilian objects such as houses, churches, monasteries and schools were destroyed during the year and a half of the conflict, although these figures are difficult to verify. The level of destruction of civilian property, especially homes, coupled with the deteriorating security situation, is compounding the phenomenon of displacement of thousands of people.
"The suffering is exacerbated by the fact that access for humanitarian aid organizations is severely restricted, even in severe crisis areas or for life-saving measures. By the end of September, despite the tense situation and limited resources, the United Nations, aid agencies and local partners were able to support almost 3, 9 million people across Myanmar, with a focus on hard-to-reach areas," OCHA said. Under the new legal framework, this support will be severely restricted and in many cases no longer possible, with serious consequences for the most disadvantaged and vulnerable groups. (PA) (Agenzia Fides, 6/12/2022)

ASIA/INDIA - International Day of Human Fraternity: to wither away the politics of hatred

ASIA/INDIA - Young Catholics: celebrate Christmas with works of mercy, to "feed the hungry"

AFRICA/DR CONGO - "In eastern Congo the situation is unbearable," says Fr. Luis Arcos, explaining why the Pope has given up on going there