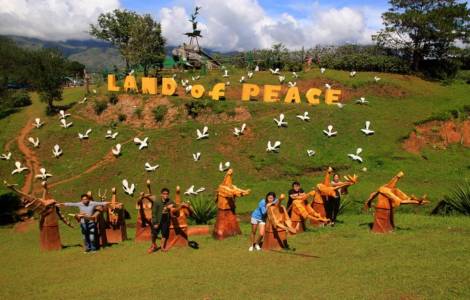 Zamboanga city (Agenzia Fides) - May the time of preparation for Christmas, which the Catholic Church calls "Advent", "be a time of reconciliation and peace in the Philippines and throughout the world": this is the message spread by the Islamic-Christian dialogue "Silsilah" movement, active in the southern Philippines, while the "Week of Peace in Mindanao", promoted by the Philippine government, ended today, December 5th.
The "Silsilah" movement, founded by PIME missionary Fr. Sebastiano D'Ambra in an area where there is a Muslim community of 6 million people, concentrated almost entirely in the "Bangsamoro Autonomous Region", says, inserting itself in the celebrations of the Week: "Today the world suffers from the numerous calamities and conflicts in the Philippines and other parts of the world. Advent means 'preparation' for the coming of Jesus which we celebrate during Christmas. Christmas is a holiday of peace for all people of good will. There are conflicts in many parts of the world due to those who seek war for their own interests and visibility, without listening to the cries of those who suffer".
"The Silsilah Harmony Prayer - continues the message sent to Fides - reads: Lord, we beg you for peace. Advent and Christmas remind us of the message of peace and reconciliation that reaches all humanity. But we cannot share peace if we do not have peace within us. This invites us to reflect: how will the arrival of Christmas this year touch our hearts and help us move with harmony, solidarity and peace?".
The path indicated by the movement is "listen more with the heart. By listening to the problems of the world, we can move in a spirit of solidarity. The period of the pandemic created many fears for us that still remain. Now the time has come to take our steps courageously, together, on the path to peace".
The provocation primarily affects the baptized: "Advent is for Christians a time of penance and preparation to welcome Jesus, Emmanuel, God-with-us. Are Christians ready to give a message of peace in all aspects of society, without waiting for others to move first?" it asks.
Painful events remain etched in the memory of the citizens of Mindanao such as the siege of jihadist groups in Zamboanga (in 2013) or that of Marawi in 2017, where the army fought and drove out Islamic terrorist groups. The scars of those events remain. Trust and suspicion between Muslims and Christians are still present today: "There are those who get discouraged and believe that new violence will overcome that violence. But the coming of Jesus into the world reminds us that the way to peace is love. His coming is for Christians a great sign of love, as described in the Gospel".
"In this spirit - writes Silsilah - we invite Christians and the faithful of other religions to live this special time by showing solidarity and promoting gesture or sign of peace that comes from different groups or communities, feeling part of the same human fraternity".
The message comes as the 25th "Mindanao Peace Week" ends today, December 5, full of events, seminars, meetings, celebrations, shows in different cities. For the organizers, the Week is like "a reminder to all Filipinos, regardless of their status in life, religion or culture, for a commitment to and lasting peace, unity and harmony".
In Manila, Undersecretary of the Mindanao Affairs Bureau, Amihilda Sangcopan, expressed the need to "strengthen peace-building initiatives under the banner of unity. Peace in Mindanao will not only depend on the action of our government, but it also depends heavily on the engagement of the citizens of Mindanao", he said. The effort of the Philippine government and army to guarantee peace and security, it should be noted, has recently materialized in the defeat - for some definitive - of the notorious terrorist group "Abyu Sayyaf", active for 30 years in the southern Philippines: more than 150 members of the extremist group surrendered to the Philippine authorities on the island of Jolo on November 8, handing over weapons and ammunition, leading observers to believe the possible definitive disappearance of the jihadist group. (PA) (Agenzia Fides, 5/12/2022)

ASIA/PAKISTAN - Interreligious meetings and closeness to the poor: the spirit of Christmas