AMERICA/COLOMBIA - Violations of environmental and social rights in Latin America and the Caribbean: accompaniment of the Church 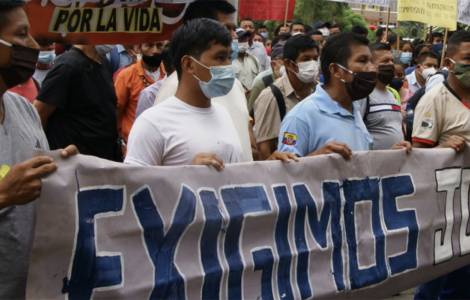 2022-12-22
Nuncio's visit to Chocò: increased challenge for confidence in the future, bet on peace, inter-institutional work

2022-12-19
Another year of violence: Bishops of Chocò call for a Christmas truce

2022-12-12
The first phase of the peace talks between the Government and the ELN, the Colombian Church "permanent companion" concludes

Bogota (Agenzia Fides) - Make known the pastoral experiences that accompany situations of socio-environmental violation at the local, national and regional-international level, as well as re-launching the appeal for the Church to continue to accompany those who find themselves living in these realities in various forms: legal, social promotion, pastoral accompaniment, advocacy, "the cry of the poor" and "the cry of Mother Earth".
This is the main objective that prompted the Episcopal Council of Latin America and the Caribbean (CELAM), through its "Commission for Integral Ecology" platform, linked to the Center for Pastoral Action Programs and Networks (CEPRAP), to open a space for dialogue and reflection on emblematic cases of violations of environmental and social rights in the different regions of Latin America and the Caribbean.
This space has been baptized "Prophetic voice in socio-environmental conflicts". The invitation is for today, Monday, December 5, at 6:00 p.m. in Colombia, by connecting to CELAM's social networks, through which one can connect and interact, through questions and comments.
As Romina Gallegos Brito, of the CEPRAP team explains, in the note sent to Fides, in this space cases will be presented in which "situations of violation and socio-environmental pressures have been experienced", at the same time we will also talk about how the Church has been able to get involved and closely accompany these situations. The intention is therefore to listen to the sharing of those who live these situations, starting from the reality, the teachings and the challenges, in order to be able to build from there a dialogue "about what the prophetism of the Church means in the midst of socio-environmental conflicts and the diversity of faces that can materialize". He clarified that "this space does not seek to describe or explain the results of the reports or projects, rather it is a forum to share thoughts on what it has meant for each of them to to be a prophetic Church on our continent".
Romina Gallegos underlines that "they all have in common that there are cries that have not been heard by those who should make structural changes to improve the situation", which is why "the Church listens to them and accompanies them, helping them in this mediation", while threats and signs of death, as well as forms of exclusion of all kinds, have increased. The steady increase in recent years of attacks against defenders of land, the environment and the rights of indigenous peoples is concentrated around the world, particularly in Latin America, where Colombia ranks first, followed by Mexico and Brazil. (SL) (Agenzia Fides, 5/12/2022)