AFRICA/DR CONGO - National mourning for the massacre in a village in the east of the country; Sunday march for peace convened by the Bishops 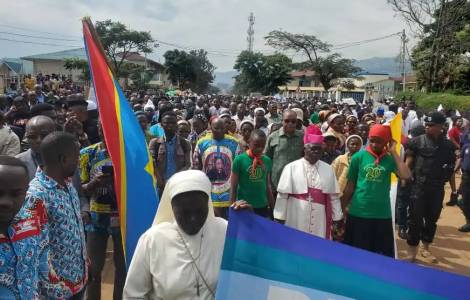 Kinshasa (Agenzia Fides) - Three days of national mourning starting today, December 3, have been announced by Félix Tshisekedi, President of the Democratic Republic of Congo, to commemorate the victims of the massacre in the village of Kishishe, in the territory of Rutshuru, 70 kilometers from Goma, capital of North Kivu, in the east of the country.
The government of Kinshasa accuses the M23 (March 23 Movement) rebels of having "cowardly killed" at least 50 civilians in Kishishe on November 29.
The M23 has denied having perpetrated the massacre, the toll of which is difficult to establish from independent sources because access to the area is impossible because it is under rebel control.
The national mourning coincides with the procession called for tomorrow, Sunday, December 4, by the Bishops of the DRC in all the Congolese dioceses to draw everyone's attention to the deterioration of the security situation in the country in general and in the east in particular, and to put an end to "the balkanization of the DRC". In other words, that process of latent dismemberment of the country operated by armed groups supported from outside.
The appeal for next Sunday's demonstration was launched at the end of the Extraordinary Plenary Assembly of the Congolese National Episcopal Conference (CENCO) held from 7 to 9 November in Kinshasa (see Fides, 11/11/2022). "Let's not balkanize the DRC, let's all stand up to safeguard the territorial integrity of our Country" said the Bishops.
On December 1 in South Kivu, in Bukavu, a demonstration for peace was already held, led by Archbishop Msgr. Francois Xavier Maroy. On the same day, the faithful of the parishes of the Kabare territory marched peacefully to ask for peace and support the FARDC (the Congolese regular army).
The demonstrators marched from their respective parishes to go to the administrator's office of Kabare where a memorandum was read calling for the establishment of peace and an end to Rwanda's aggression of the DRC under the cover of the M23.
For decades, several militias have been operating in eastern DRC. Among these is the M23, which has taken control of several places in the territories of Rutshuru and Nyiragongo, in the province of North Kivu. The M23 rebel movement, defeated in 2013, took up arms again at the end of last year. Kinshasa accuses Rwanda of supporting it, arming it and even fighting alongside it, which Kigali denies (see Fides, 5/11/2022).
In an attempt to ease tensions in eastern DRC, several diplomatic iniatives have been launched, notably by the Community of East African States (EAC). The latter has decided to deploy a regional force, including Kenyan soldiers (see Fides, 19/11/2022), and has launched a new session of peace talks in Nairobi, without however the participation of the M23. (L.M.) (Agenzia Fides, 3/12/2022)

AFRICA/NIGERIA - Six months after the massacre of the Saint-François-Xavier church in Owo, questions are being asked about who committed it