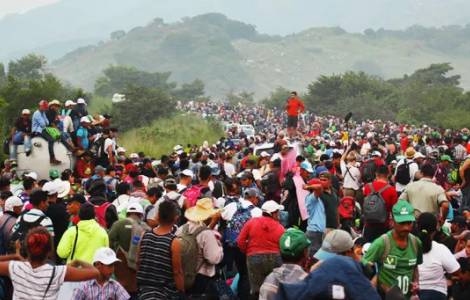 2022-12-17
Ministry of the "missionary" Catechist: criteria and formation itineraries of Episcopal Conferences

Bogota (Agenzia Fides) - More than 7 million people are forcibly displaced and seeking asylum in Latin America and the Caribbean. Countries such as El Salvador, Guatemala and Venezuela have seen a sharp increase due to, among other things, the influence of organized crime, outlaw groups and the economic effects of political systems. It is against the backdrop of these estimates provided by the United Nations Refugee Agency (UNHCR) that the Latin American Meeting of Migrant Houses, which ends today, December 3, is taking place. The work, hosted at the headquarters of the Latin American Episcopal Council (CELAM), began on November 28 on the biblical theme "I was a stranger and you welcomed me".
Organized by "Red Clamor" and the UNHCR, as reported by Adn Celam, the meeting brings together the heads of 23 migrant houses from 13 countries on the continent, who, among other objectives, intend to develop a global protocol for assistance to migrants and refugees in Church-run temporary houses in Latin America and the Caribbean, and share good practices in providing humanitarian assistance to migrants and refugees.
Red Clamor is "a network of networks" which, linked to CELAM, coordinates and supports the pastoral work of organizations of the Catholic Church in Latin America and the Caribbean which welcome, protect, promote and integrate migrants, displaced persons, refugees and victims of trafficking.
The intention of these days of meetings was to work towards the creation of various articulations that strengthen the actions of Red Clamor, with the technical support of UNHCR, to offer a better service by responding to the needs of migrants in different regions of Latin America. The humanitarian principles guiding the assistance to people in situations of mobility, refuge or migration have been reaffirmed: this is a constant in the reality of this time for the Latin American continent. No effort should be spared to offer adequate support to people who, for one reason or another, have decided or have been forced to leave their place of origin to rebuild their life project, improve it or completely transform it.
Among the issues discussed are the urgency of preparing to provide effective care, the priority given to the age of those receiving such care and the needs of different population groups. The need to implement and improve registration systems and early identification of the needs of the migrant population was also highlighted, as well as mechanisms that can help prevent problems such as sexual exploitation, sexual abuse and gender-based violence. So many dramatic situations that are part of the pain of people who use the services of migrant shelters.
To achieve these goals, temporary reception centers for migrants must have a basic infrastructure, meeting the minimum standards of assistance, because goodwill alone is not enough. Staff must also be trained to listen to the needs of migrants, provide them with useful advice for their future and cooperate to this end. All of this requires sufficient economic resources, both from private funds and government aid, so that migrant hostels have safe and adequate spaces for the people they welcome. (SL) (Agenzia Fides, 3/12/2022)

AMERICA/BRAZIL - General Assembly of the Scalabrini Missionary Sisters: In times of global crisis, the phenomenon of migration remains a priority

AFRICA/DR CONGO - Eastern DRC: not only jihadists but a complex network of local and foreign interests