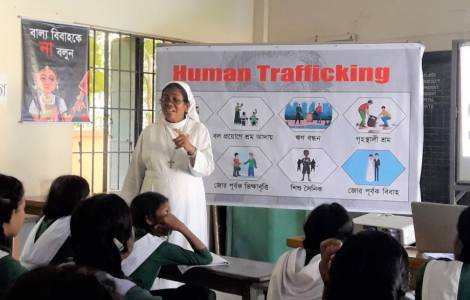 2022-11-14
Ten couples choose the sacrament of marriage: a new path in the Catholic community

Gazipur (Agenzia Fides) - Jaeda Akhter, a thirty-year-old Bangladeshi, wife and mother of a child, who lives with her family in the outskirts of Dhaka, was the victim of an international gang of human traffickers and brought to India at the end of 2020 with the prospect of emigrating to the UK or Canada. Her husband and parents let her go with the dream of alleviating their poverty. This choice turned out to be a nightmare. Beaten, raped, enslaved and forced into prostitution in India, after having lived a series of painful experiences, including imprisonment, she managed to return home in a state of physical and mental prostration. Her story is that of hundreds of girls from poor families in Bangladesh. "Bangladesh girls become easy victims for human traffickers", explains to Fides Sister Josephine Rozario, religious of the Salesian Sisters of Mary Immaculate, coordinator in Bangladesh (with Fr. Liton Gomes) of the "Talitha Kum Network", the international network that fights against human trafficking. In her commitment, the nun directly saved at least ten girls and indirectly many others.
The Catholic sisters, volunteers and teachers of "Talitha Kum" carry out awareness-raising and educational work in schools, parishes and communities in order to make young girls aware of the existence of social phenomena such as early marriage, forced marriage and human trafficking in Bangladesh and thus combat these phenomena. In recent days, in Toomila parish in Gazipur, near Dhaka, sisters and teachers held a seminar to talk about violence against women and human trafficking, organized by Talitha Kum Network Bangladesh.
"Bangladesh is one of the Asian countries most exposed to this phenomenon, due to poverty and ignorance of these criminal dynamics. By raising awareness among girls and families, we carry out an important prevention work", explains the nun.
Since 2020, Talitha Kum Network Bangladesh has organized 16 seminars against early marriages and human trafficking.
Sumi Gomes, a teacher, said she spoke to her adolescent students "so that they can save themselves from human trafficking and early and forced marriage". The aim is to involve adolescents girls and young women so that they too can then play an active role in society against human trafficking.
"A few months ago, in Noluakuri in the diocese of Mymensingh, a 14-year-old girl told me that her parents had arranged her marriage; but by force of her will, annulled it after taking part in one of our seminars", says Sister Josephine Rozario. And she adds: "We also support the victims and their families by providing them with financial assistance, in order to enable them to reintegrate and start their lives over again". Father Giovanni Gargano, Xaverian missionary and priest in Noluakuri, notes: "These seminars are very popular in our region because, in remote areas, girls are vulnerable and many poor or uneducated parents tend to entrust them, with the mirage of a better life, to intermediaries who then turn out to be members of criminal networks".
Bangladesh is a source and transit country for human trafficking, particularly for phenomena such as forced labor and forced prostitution. According to the United Nations Office on Drugs and Crime's Global Report on Trafficking in Persons, citizens of Bangladesh, India and Pakistan are trafficked into at least 40 countries in South Asia. Forty percent of Bangladeshi victims are women who end up in slavery in countries like India, Malaysia, Singapore or the Gulf countries, while 15% are children. According to Bangladesh government data, more than 50,000 Bangladeshi women have been victims of human trafficking in the last ten years.
Bangladesh's Foreign Minister, AK Abdul Momen, said the government has taken strict measures against trafficking networks active in Bangladesh. At the same time, he said,
awareness campaigns are crucial so that people do not make the mistake of falling into trafficking networks, which are still active especially in the south-central districts of Shariatpur, Madaripur and Faridpur. And if the police force's intelligence work continues, "raising public awareness is the most important thing," he noted. In this regard, the work of Talitha Kum Bangladesh is very useful and appreciated by the civil authorities. (PA/FC) (Agenzia Fides, 1/12/2022)

AMERICA/DOMINICAN REPUBLIC - Birth of the Association of Catholic Universities, for a greater presence of the Church in society

AMERICA/VENEZUELA - "Let's not wait for things to improve by themselves, but we trust in God's help, taking risks together to build a better country"

AMERICA/ARGENTINA - Just as we have been united in sporting joy, we also face the different problems of society together