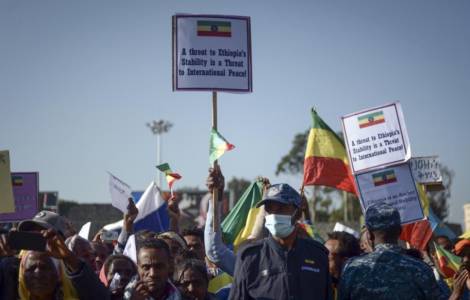 Rome (Agenzia Fides) - "Despite the enormous difficulties caused by the crisis, the effects of the conflicts, climate change and the severe drought that are afflicting our country, the population at least finds relief in the fact that a 'climate of peace' is beginning. We have followed with confidence the development of the peace agreements (see Fides, 24/11/2022) and now we wait with hope that they will produce effects. People are exhausted by the war, which has destroyed lives, property, relationships between communities", said Father Teshome Fikre Woldetensae, General Secretary of the Ethiopian Episcopal Conference to Fides on the sidelines of the Caritas Internationalis Conference.
"The Church in Ethiopia has long been committed to resolving the conflicts in Tigray and in the Oromia region in the west of the country", said the General Secretary, recalling the many emergencies that characterize the current dramatic situation: "Due to the war the number of displaced persons increased. Some of them are still in refugee camps, others are returning to their homeland. We are also currently dealing with climate change, with a drought that has become very bad. The southern and eastern parts of the country are hardest hit. The crisis of the war between Russia and Ukraine, which has led to an increase in the cost of living around the world, has also hit us hard, with the poorest suffering the most".
Regarding the situation of schools and education, Father Teshome Fikre Woldetensae recalled the problem of schools, which have been closed for years in many areas of the country due to the Covid 19 pandemic and the conflicts. "In recent years, we have tried to help children and internally displaced people in refugee camps who lack everything, even basic necessities. In addition, many families have lost their resources and livestock due to the drought, leading to an increase in malnutrition rates of children and the elderly. The Church, together with Caritas in the parishes, tries to feed as many children as possible, in families, schools and refugee camps".
With regard to the peace agreement, the priest expressed confidence. "For the past two years we have heard nothing but war, destruction and betrayal, and now it is hopeful to learn that the two warring factions are meeting to negotiate peace. We hope and continue to pray that this will happen. We hope that systems will be put in place to check that the promises and commitments made by the parties are actually being kept. The first positive results are being seen, the humanitarian corridors are open and many organizations are sending their support in convoys. The Catholic Church also makes a contribution in close cooperation with international partners in the country. If there is political commitment and the parties to the conflict are willing not to focus on their own interests but on the concerns of the people, of the poor and the afflicted, everything can be solved more easily, people are happy, they are the ones who have paid the bitter price. It is the poor who have lost everything they own, who have died in wars and conflicts".
"As with all negotiations, there may be delays", the cleric added, "but I see there is interest and political commitment on both sides, and the international community has been encouraging the parties to the conflict to engage in dialogue and intervene in a timely manner to deal with humanitarian emergencies". The Tigray region is experiencing a moment of great hope, not least because of the aid that is arriving".
"The Church", adds the Secretary General of the Ethiopian Bishops' Conference, "has always been with the people, the Bishop of the Eparchy of Adigrat is there, the missionaries are there! We keep in touch as much as possible. We are in contact with the staff of the diocese and the parishes when they have the opportunity. We used all possible channels to get humanitarian aid. When we sent missionaries and our workers to the Tigray region, we met with Bishop Tesfaselassie Medhin. Last July, the director of Caritas Ethiopia was in Adigrat, along with leaders of other Caritas organizations, and they too spoke to him, who certainly has many problems, because everything is really lacking, and he, as a pastor who lives among the suffering people, has little opportunity to do anything now and it hurts him.
All Ethiopian bishops and the bishops' conference have tried, through Caritas, to help as best they can and to share the suffering of the people".
Fr. Fikre adds that pain and desperation are not unique to the Tigray region: "There is another conflict in the western part of the country that the media does not report on and no international organization is interested in. There are also many displaced people there, and every day many people are dying in the guerrilla fighting in that area. Now that the conflict in Tigray has attracted international attention, we also need to look at the other flashpoints that involve so many other parts of the country. In general, little attention has been paid to this emergency, there is still little humanitarian aid for the displaced people. Again, this is a very serious situation in which the victims are, once again, poor farmers". (AP) (Agenzia Fides, 25/11/2022)