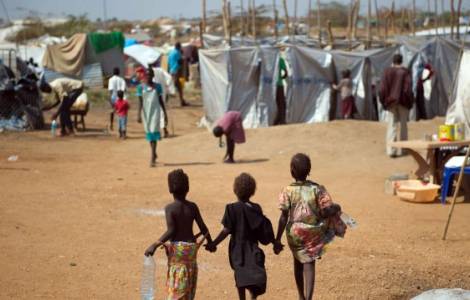 2022-12-13
Overcoming Ethnic Conflicts: Education as an Instrument of Peace

2022-12-06
Upper Nile: More than six thousand people forced to flee after the assault on the Aburoch reception camp

El Obeid (Agenzia Fides) - The situation of the internally displaced continues to worsen due to the ongoing conflicts between the Ngok and Twiic Dinka ethnic groups in one of the four counties called Aneet Romamer in the administrative area of Abyei. The bishop of the diocese of El Obeid, Yunan Tombe Trily, has shown his total solidarity with the population that is facing a genuine humanitarian catastrophe. The prelate, who is also president of the Bishops' Conference of Sudan and South Sudan (SSSCBC), after a pastoral visit to the parish of Saint Mary, in the administrative area of Abyei, has launched an appeal to Caritas South Sudan and other United Nations agencies to intervene immediately.
"I appeal to Caritas, and in particular to Caritas South Sudan, to act immediately to save the population of Abyei, providing food and health services to the inhabitants of Aneet and Agok". The bishop urged the governments of Sudan and South Sudan to ask NGOs and UN agencies for humanitarian aid promptly. "I strongly urge the Republic of Sudan and South Sudan to work hard and quickly find a solution to the Abyei issue."
In February 2022, a new inter-ethnic conflict broke out between the Ngok Dinka of Abyei Administrative Area and the Twiic Mayardit Dinka of Warrap State, over a land claim over a stretch of a local market. According to local sources, violence resumed on October 10, burning houses and looting property, causing the loss of life and the displacement of thousands of people on both sides. The situation is really dramatic.
Pope Francis has said that he is prepared for a visit to the country, which has already been postponed to July 2022. Addressing the participants in the Meeting of Doctors with Africa Cuamm, held at the Vatican on November 19, 2022
(see Fides, 18/11/2022), the Pontiff has anticipated the news of the trip, which is expected to take place at the beginning of 2023.
"When we pray 'Give us this day our daily bread', we should think carefully about what we say, because many men and women receive the crumbs of this bread, or not even that, simply because they were born in certain parts of the world", he said in reference to the South Sudanese population.
Abyei is an area of 10,546 km2 on the border between South Sudan and Sudan, which was granted "special administrative status" by the 2004 Abyei Conflict Resolution Protocol (Abyei Protocol) in the Comprehensive Peace Agreement (CPA) that ended the Second Sudanese Civil War. Under the Abyei Protocol, the area was provisionally considered to be a simultaneous part of the Republic of South Sudan and the Republic of Sudan.
However, following ongoing disputes that escalated to violence and threatened the 2004 peace agreement, an international arbitration process redrawed Abyei's border in 2009 to make it smaller, no longer extending north. This revised border has been approved by all parties. (AP) (Agenzia Fides, 21/11/2022)