AMERICA/MEXICO - The Bishops: "let's not stand idly by and look at the problems that concern everyone" 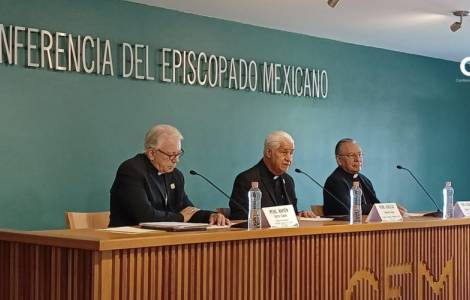 2022-11-07
Electoral reform: no one has the right to promote reforms that compromise the strength of democratic institutions

2022-08-29
Bishops: “Nothing must distract us from the essential task of education. Peace is possible. Educating to build it is a priority"

2022-07-07
Day of prayer for peace on July 10: "the indignation of our people, faced with the barbarity of violence, is opening a door for peace"

Cuautitlan Izcalli (Agenzia Fides) - The "concern for the reality we are experiencing" and, at the same time, "the desire to continue collaborating in the construction of a more just and fraternal country, united and in peace" is what is expressed by the Bishops of Mexico, at the end of the Assembly of the Mexican Episcopal Conference (see Fides, 8/11/2022). In the message published yesterday, the Bishops affectionately greet all people of good will, sharing "the joy of believing and the great wishes of this people who have overcome many and various difficulties in their history."
Among the various reasons for special concern, in the "complex and challenging" times we live in, the Bishops cite growing poverty, environmental destruction, insecurity and violence, drug trafficking and addiction, extortion and kidnapping, the femicides, the thousands of disappeared, "the forced displacement of so many migrants who, in search of a better life, cross the national territory converted, unfortunately, into human merchandise."
To this are added the threats to democracy, religious freedom and freedom of expression, and finally political polarization, "fueled several times by those who should promote unity for the good of the country." Inviting us not to lose hope and not to be intimidated, according to the words of Jesus (cf. Jn 14:27), the bishops urge "to be sensitive to the current situation and not to stand idly by and look at the problems that concern everyone". Then they quote Pope Francis, who in his message to the Bishops of Mexico on February 13, 2016, called for them to work together to respond to this reality, beginning with families, involving communities, schools, community institutions, political communities, security structures.
"The Bishops of Mexico perceive that the vast majority of Mexicans dream of and are willing to build a society in which we can all sit in harmony at the common table," the message continues, inviting us to "shake hands as brothers" to find new paths in social, political and economic relations, that lead us to build a better country for all. Among the signs of hope, the bishops mention the organization of talks and forums, with a view to a national dialogue to reach peace agreements, in which various sectors of civil society participate and which they would like to join.
The message concludes by invoking the intercession of the Blessed Virgin of Guadalupe, "present in the hearts of all her children" and with an invitation: "The Bishops of Mexico pray for you, our people, and we entrust ourselves to your prayers."
A few days ago, on the eve of the start of the work of the Assembly, the Mexican bishops had published a declaration on the reform of some articles of the Constitution in electoral matters, proposed by the president of Mexico, Manuel López Obrador, in which they said: "The defense of our electoral institutions is the responsibility and duty of all citizens. That is why we say together with millions of voices: 'let's not endanger the stability and democratic governance of the country'". (see Fides, 7/11/2022). (SL) (Agenzia Fides, 11/11/2022)