AFRICA/ETHIOPIA - The forgotten victims of the Tigray war: the fate of 100,000 Eritrean refugees 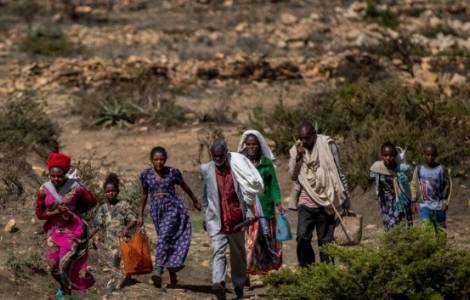 Shire (Agenzia Fides) - In the last two years of the ongoing conflict in the northern region of Ethiopia, very little has been said about Eritreans. While 60,000 Tigrayans have been displaced from their homes to refugee camps in Sudan, other 100,000 Eritreans have lived in Tigrinya camps since the war broke out in November 2020. However, the figures released remain inaccurate. Ethiopia was considered a safe place for Eritrean refugees and has hosted a large number of them for years. However, since the end of 2020, they have found themselves involved and attacked by almost all the fighting groups often targeted because of their ethnicity. In fact, Eritreans can easily be confused with Tigris, both of whom speak Tigrinya. They were also attacked by Eritrean troops and in some cases even kidnapped and taken back to Eritrea.
Industry insiders argue that there are still major obstacles to overcome before a peace agreement is reached and even if peace were reached today and humanitarian assistance increased exponentially, Ethiopia will struggle to provide adequate protection and assistance to Eritrean refugees in the coming years.
According to official estimates, there are more than 72,000 Eritrean refugees in Addis Ababa, of whom around 43,000 have relocated themselves. Approximately 22,000 have been provided with documentation, including ID cards for refugees that allow them to reside in the capital for 3 years and financial aid to cover some of their basic needs. More than 14,000 families were also helped to open bank accounts.
At the end of September 2022, the United Nations Refugee Agency, UNHCR and WFP managed to distribute food and other basic necessities in the Mai Aini camps, among the largest with small-town proportions, where refugees live in shacks built on top of each other, along constantly windswept streets.
Given the dire humanitarian situation and with the new access granted to humanitarian aid, most of the refugees have asked to be relocated to the Alemwach settlement in the Amhara region. So far more than 3,400 have been relocated and received shelter, medical care, hot meals and basic necessities. In Afar, more than 57,000 Eritrean refugees are housed in the Aysaita and Serdo camps and surrounding areas following the attack on Barahle camp in February 2022. (AP) (Agenzia Fides, 10/11/2022)