ASIA/CHINA - Celso Costantini's “prophecy”, 100 years after his arrival in Beijing 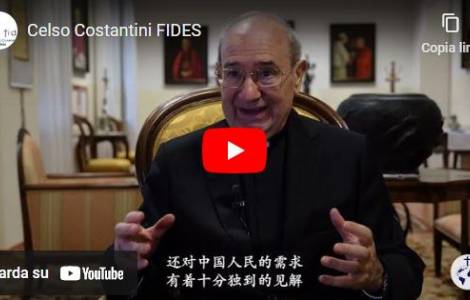 2023-01-26
Grief not removed and hope cherished. Letters and gestures of communion in the Chinese Catholic community at the beginning of the "Year of the Rabbit"

2023-01-20
Chinese New Year. Christian hope embraces the expectations and sorrows of the "great army of ChunYun"

2023-01-10
Christmas time for Chinese Catholics. When the light of Jesus crosses the days of pain

2023-01-02
Chinese bishops and the People of God pray for Pope Ratzinger: may he continue to intercede for the good of our Church from heaven

Pordenone (Agenzia Fides) - One hundred years ago, Cardinal Celso Costantini, from the Friuli region of northern Italy, arrived in Beijing after a long journey, sent to China by Pope Pius XI as the first Apostolic Delegate. A mission kept secret until his arrival in Hong Kong, to save it from the sabotage of the European powers. "Especially in towards the Chinese - Costantini later wrote in his memoirs, recalling his arrival - I found it prudent in no way to arouse the suspicion that the Catholic religion appeared to be under the protection of the European nations or worse, as a political instrument to be put at its service. From the very beginning, I wanted to exercise my freedom of action in the field of religious interests and refused to be accompanied to the local authorities by representatives of foreign nations. I should have been in China gives the appearance of being subordinate to these representatives".
Exactly one hundred years after the arrival of Celso Costantini in Beijing, in a video produced by Teresa Tseng Kuang yi for Fides (see link), is interviewed by Father Bruno Fabio Pighin, professor at the Faculty of Canon Law St. Pius X in Venice and Episcopal Delegate for the cause of canonization of Costantini himself.
Cardinal Celso Costantini (1876-1958), pioneer of the Vatican dialogue with Beijing, was the first Apostolic Delegate to China from 1922 to 1933. In those years, Costantini managed to convoke the first council of the Catholic Church in China (Shanghai 1924) and set in motion the process of ecclesiastical "decolonization", fighting the stubborn vestiges of the protectorate and all forms of Catholic presence in China continued to impose European traits on the Far East, eventually portraying them as the religious correlate of Western expansion in those countries. Thanks also to the commitment of Costantini, on October 28, 1926 the first 6 Chinese bishops ordained in modern times were consecrated by Pope Pius XI in St. Peter's Basilica in the Vatican. In 1927, Costantini also promoted the founding of the Congregatio Discipulorum Domini (CDD), China's first ecclesiastical religious institute. With his support, the first Catholic university in China, Fu Ren University, was founded, which is now based in Taiwan.
The Apostolic Delegation in Beijing was raised to the rank of nunciature only after the war, in 1946. In the same year, Pius XII established the Chinese episcopal hierarchy, recognizing its responsibility and autonomy of government from Western institutions. These results were also obtained thanks to the patient and far-sighted work of Celso Costantini, who had continued to support the flourishing of the native Catholic Church in China, even from Rome, where in 1935 he had become secretary of the Congregation de Propaganda Fide.
Costantini held the office of Secretary of the Missionary Dicastery until 1953. Pope Pius XII created him Cardinal in the Consistory of January 12, 1953. He died in Rome on October 17, 1958. In September 2016 (see Fides, 6/10/2016) the Bishops' Conference of the Italian region of Triveneto announced that it had issued a positive opinion "at the beginning of the process of beatification of Cardinal Celso Costantini (1876-1958), a figure of considerable missionary enthusiasm and pastoral charity as well as evangelizer of China originally from the Diocese of Concordia-Pordenone". (GV) (Agenzia Fides, 8/11/2022)