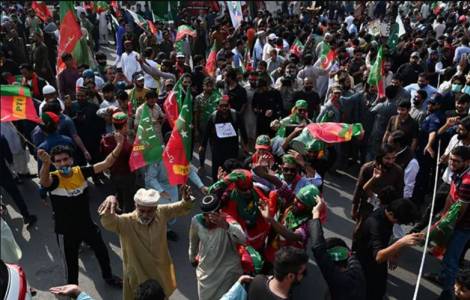 2023-01-30
Interreligious dialogue as a path to peace: may it be included in school study

2023-01-26
Forced religious conversion: may the government accept the appeal submitted to the UN

2022-12-21
Interreligious meetings and closeness to the poor: the spirit of Christmas

Karachi (Agenzia Fides) - "The country lives in a situation of uncertainty and precariousness. Society is deeply polarized. The party of former Prime Minister Imran Khan enjoys some popular support, even among the most educated people. We will see what his political initiative and the "long march" of his supporters to the capital will lead to. But today, the country needs stability and good governance to face the post-flood emergency, which has brought the nation to its knees": this is the analysis shared with Agenzia Fides by Fr Mario Angelo Rodrigues, priest of the Archdiocese of Karachi, involved for years in Youth Ministry, today Dean of the prestigious St. Patrick High School in Karachi, an important Catholic educational institute that welcomes over 4,000 students.
Former Pakistani Prime Minister Imran Khan, leader of the Tehreek-e-Insaf (PTI) Party announced the organization of a massive protest march to the country's capital, Islamabad, to challenge the government of current Prime Minister Shehbaz Sharif. The event is scheduled for Thursday, November 10. Started at the end of October in the city of Lahore, with thousands of supporters, the march was interrupted after Imran Khan was wounded in the leg by an attack when a gunman attacked his convoy, killing one of his supporters. In addition to the leader, thirteen other people were injured. The attack raised concerns about growing political instability in Pakistan. After the bombing, Khan's supporters gathered across the country, blocking roads in the cities of Islamabad, Lahore, Peshawar and Rawalpindi and clashing with police.
Khan, ousted as prime minister last April by a vote of no confidence in parliament, has since been trying to regain his political rise. Father Rodriguez pointed out to Fides: "Khan puts forward issues such as the fight against corruption, the fight against poverty, social change, winning the favor of large segments of the population, and he has the support of all parties among people of all walks of life, culture, ethnicity, religion, even among minorities. We will see what the result of his political action will be. It is certain that in this delicate phase, where we must meet the complex challenge of the reconstruction after the floods, with the necessary reconstruction of the infrastructure network destroyed by the fury of the waters, the nation needs stability, in order to properly organize the aid and the process of socio-economic recovery, and to resume the path development. Hundreds of thousands of people are in need and international aid remains crucial for Pakistan".
He concludes: "We hope, as citizens and Christians in Pakistan, that we will work for the common good of the nation and for solidarity with the poorest and most needy, putting aside all personalism and selfishness". (PA) (Agenzia Fides, 8/11/2022)

AMERICA/PERU - Open letter from the bishops to the members of Congress: "Do not turn your back, listen to the cry of all the Peruvian people"

AFRICA/NIGERIA - Assaults on road construction sites in Imo State. The Bishop of Okigwe wonders who has an interest in blocking development in the area

AMERICA/CILE - Christian community in solidarity with victims of forest fires that have so far caused 26 deaths, 1,000 injured, 1,800 homeless