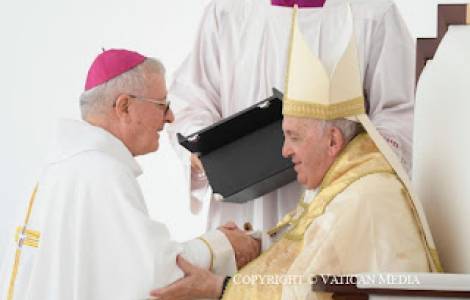 2021-12-09
"Civil inauguration" of the Cathedral of Our Lady of Arabia, in the presence of Cardinal Tagle

by Gianni Valente
Awali (Agenzia Fides) - In Bahrain, the archipelago kingdom which this morning, Saturday November 5, saw some 30,000 people gather at the Bahrain National Stadium in Awali to take part in the liturgical concelebration presided over by Pope Francis, the Catholics of 1938 were less than one hundred and fifty. Today - according to the leaders of this local Church, by approximation - there are at least 80,000. A surprising, unplanned growth, linked to the impressive migratory flows which, in recent decades, have brought millions of Catholic immigrants looking for work in all the countries of the Arabian Peninsula.
The considerable growth of the Catholic community in Bahrain and throughout the Arabian Peninsula has taken place in a country lacking strong ecclesial structures and well-defined pastoral "programs". Priests, nuns and missionary bishops, who also came from afar, accompanied for decades, with apostolic sagacity, the journey of this variegated people of God who came to seek work in the Emirate - today Kingdom - from Bahrain. Local church leaders, acting in concert with the Congregation of Propaganda Fide, also found ways to establish good relations with the local authorities, adapting even the outward forms of church life to the given situation. Remembering some of their figures is a way of recounting one of the most original missionary adventures of the last century.

The first church and the deported Bishop
In 1938, Bahrain's approximately 150 baptized Catholics could only receive the sacraments during sporadic visits by a Carmelite priest from Baghdad to the archipelago. When the influx of Catholic immigrants seeking employment began, Bishop Giovanni Battista Tirinnanzi, Vicar Apostolic of Arabia - who was residing at the time in Aden, Yemen - traveled to Bahrain and was received by the Emir at the time - Hamad bin Isa Al Khalifa, great-great-grandfather and namesake of the current ruler - from whom he asked for land to build a church, intended to become the first place of Catholic place of worship erected in the Persian Gulf region in modern times. The church, dedicated to the Sacred Heart of Jesus, was consecrated on March 8, 1940. After the start of World War II, the British occupying forces in Yemen expressed their impatience with the presence of an Italian bishop in their colony, and the Apostolic Vicar Tirinnanzi was forced to return to Italy. In Bahrain, the Capuchin friar Irzio Luigi Magliacani had been called from Tuscany to supervise the construction of the church. In December 1941, Father Magliacani, being Italian, was also arrested by British troops and deported to India for three years, to a concentration camp in the district of Dehradun. In 1950, Magliacani himself was appointed Apostolic Vicar of Arabia, while in May 1953, the School of the Sacred Heart, adjacent to the parish of Manama and entrusted to the care of the Comboni Sisters, was born.
From the mid-1950s, the influx of Catholic migrant workers into Bahrain began to grow exponentially. The parish experienced a gradual expansion of its pastoral and charitable activities under the leadership of the parish priest Felicio Diniz.

The 29 years of vicariate of Bishop Gremoli
In the late 1960s, Aden became the capital of the Marxist-ruled People's Democratic Republic of Yemen, and the Vicariate of Arabia lost its historic seat. After a few years of "sede vacante", Paul VI appointed in 1975 the Capuchin friar Giovanni Bernardo Gremoli as vicar apostolic of Arabia, who was ordained bishop by the Brazilian cardinal Agnelo Rossi, at that time Prefect of the Congregation for the Evangelization of Peoples. Gremoli remained at the head of the vicariate - whose headquarters had been transferred to Abu Dhabi - until 2005. In 2008, recounting in an interview his long experience and the patience he had shown in negotiations with the local authorities to obtain permissions to build new churches, Bishop Gremoli pointed out that the leaders of the countries included in the Vicariate had often expressed their appreciation for "the good conduct of our Catholics, who have always endeavored to observe the local rules of coexistence and showed a religious fervor which positively impressed the local authorities". The dynasty that rules Bahrain, Bishop Gremoli pointed out, "has always been benevolent towards Catholics".

The company of martyrs and saints
In 2005, the Comboni missionary Camillo Ballin, originally from Veneto, was appointed Apostolic Vicar of Kuwait and was consecrated bishop in the cathedral of Kuwait City by Cardinal Crescenzio Sepe, at the time Prefect of the Congregation of Propaganda Fide. In 2011, the Holy See redesigned the ecclesiastical circumscriptions in the countries of the Arabian Peninsula, extending the jurisdiction of the Apostolic Vicariate of Kuwait to the territories of Bahrain, Qatar and Saudi Arabia. Thus was born the Apostolic Vicariate of Northern Arabia, entrusted to the direction of the Comboni Bishop. For 15 years, Vicar Apostolic Ballin also served with realism the many communities of baptized Catholics - including more than a million in Saudi Arabia, which has no churches - who arrived in his Apostolic Vicariate following the flow of immigration from dozens of different nations, beginning with India and the Philippines.
In his public interventions, also in response to questions aimed at emphasizing the contrasts between Christianity and Islam, Bishop Ballin - who, in order to move around more easily in the territories of the Vicariate, had taken a Bahraini passport - acknowledged that in the countries included in the Vicariate entrusted to him "there are no ongoing persecutions". The intensity of the gaze of faith with which he looked at the vicissitudes of Christians in the Arabian Peninsula also emerged in the words he entrusted to Agenzia Fides (see Fides 5/3/2016) on the occasion of the martyrdom of the four Missionary Sisters of Charity massacred on March 4, 2016 in Yemen by the commando of terrorists who had stormed a retirement home in the city of Aden that day, killing 12 other people in addition to the nuns.
"The closer the Church is to Jesus Christ - said the Apostolic Vicar of North Arabia in the face of these events of martyrdom - the more she participates in his passion". "Those who approach Christ are involved in his passion and his death, to be involved also in the glory of his victory".
Bishop Ballin died of illness on April 12, 2020. The Apostolic Vicariate of North Arabia is now headed by Apostolic Administrator Paul Hinder, the Swiss Capuchin Bishop who until last May also headed the Apostolic Vicariate of South Arabia (whose jurisdiction includes the United Arab Emirates, Oman and Yemen). It was Bishop Hinder (see photo) who addressed the usual words of thanks to Pope Francis at the end of the Mass celebrated in the Bahrain National Stadium. "Like your patron Saint Francis of Assisi, said Bishop Hinder addressing the Successor of Peter, you are not afraid to build bridges with the Muslim world and to show your fraternal closeness to all people of good will, regardless of their cultural background and religious belief. We Christians of the Middle East - those of ancient Eastern tradition and those who, as migrants, temporarily reside in this part of the world - seek to implement the invitation of Saint Francis to his brothers to "live spiritually among Muslims...not to argue and (simply) recognize that (we) are Christians". (Agenzia Fides, 5/11/2022)

ASIA/PAKISTAN - Interreligious meetings and closeness to the poor: the spirit of Christmas