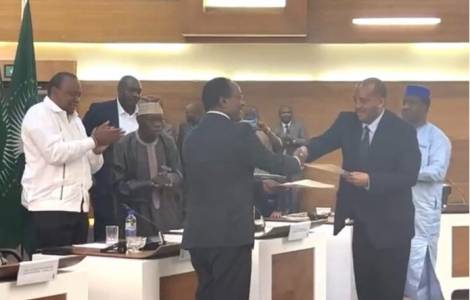 Addis Ababa (Agenzia Fides) - On the night of November 3-4, 2020, hostilities began between the Ethiopian Federal Army and the Tigray militias of the TPLF. Yesterday afternoon, November 2, 2022, after several days of intense negotiations led by the African Union in Pretoria, South Africa, a historic peace agreement was reached between the warring parties.
"Ethiopia is a great nation and must continue to be, it is the pride of Africa," said the African Union High Representative for the Horn of Africa, Nigerian Olusegun Obasanjo, stressing that with this agreement, the parties commit to "a permanent cessation of hostilities, an orderly, regular and coordinated disarmament, as well as the restoration of public order and services, in addition to unhindered access to humanitarian aid and the protection of women and children".
Prime Minister Abiy expressed his gratitude to Obasanjo and the entire commission for this important outcome, a solution that saw "Africans solving Africans' problems". In recent days, Mr. Abiy had repeatedly denounced foreign interference in the peace talks.
The Prime Minister's national security adviser, Redwan Hussein, also said it was a victory for Ethiopia and for peace itself: "We must rejoice and look beyond the atrocities of the war ".
Despite the continued Eritrean bombardments, particularly in the town of Adigrat, the peace agreement opens a new chapter in the history of Ethiopia and great hope for the resumption of normal life in the northern regions of Ethiopia.
Last August, after a five-month truce, government troops, supported by Amara militias and the Eritrean army, attacked the Tigray militias of the TPLF, taking control of key towns in Tigray (see Fides, 24/8/2022). In particular, Eritrea, with large forces and heavy shelling, hit hard the civilian population already exhausted after two years of war. The number of civilian casualties is uncertain, but it is believed to be in the hundreds of thousands, not counting the wounded who no longer have any hope of being treated in hospitals, now devoid of everything.
For now, it seems that the Eritrean troops are losing a lot of men and vehicles in the fighting and are besieged all along the road that connects the western city of Shire, the city of Axum, where, according to Ethiopian tradition, the Ark of the Covenant is kept in the Church of Saint Mary of Sion, and the town of Adua, where in 1986 Ethiopians defeated Italian troops in a historic battle still celebrated today in Ethiopia. (GF) (Agenzia Fides, 3/11/2022)