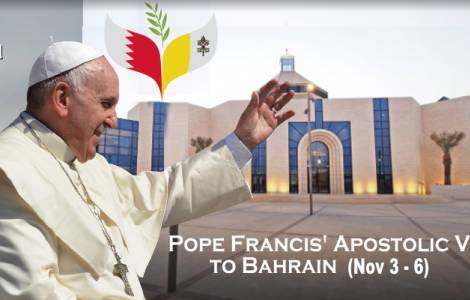 by Gianni Valente
Manama (Agenzia Fides) – The beginning of Pope Francis' apostolic journey to the Kingdom of Bahrain (3-6 November) also provides a propitious opportunity to recognize the surprising ways with which the promise of Christ («I am with you every day, until the end of time») can shine in the lives of men and women in every context and in every situation, in the course of history.

A flourishing Church "without a mandate"
In the early centuries of Christianity, the Arabian Peninsula was also reached by the exciting missionary progression achieved in Asia by the ancient Church of the East, of Nestorian ancestry. An adventure whose traces can been seen in ancient churches also scattered in Saudi Arabia. In recent decades, migratory flows have also brought millions of Christians in search of work to the Countries of the peninsula. In this way, nations united by a political and social order with a solid Islamic matrix have become the scene of a singular phenomenon of ecclesial flourishing.
Among the one and a half million current residents in the Kingdom of Bahrain, Christians are more than 210 thousand. According to the data proposed by the pastoral leaders of the region, Catholics are at least 80 thousand. Throughout the Arabian Peninsula, Catholics are currently more than two million, belonging to different nationalities and ecclesial traditions: Indians, Filipinos, Pakistanis, Sri Lankans, Lebanese, Jordanians, Egyptians, or from different countries of Europe and America... A multilingual and multi-ritual Christianity, which emerged in an unscheduled way, without the help of any recruitment campaign. An ecclesial community gathered together starting from the vital and concrete interests that push millions of people to leave their homelands to seek a decent salary in the Arabian Peninsula at oil extraction plants, in the construction sites of glass and reinforced concrete skyscrapers, in the homes of the local rich, in the networks of services and infrastructures that grew with the economic boom of the region. The effect - unexpected and not sought - is that there have never been as many Christians in the Arabian Peninsula as there are now.
The diverse Catholic community of Bahrain - like the others scattered throughout the Peninsula - also shares a condition of mobile provisionality which in other forms and situations characterizes the daily life of a large part of humanity, in the time of globalization and large migratory flows. What brings together the multitude of Christian expatriates residing in the Arabian Peninsula is not their roots in common ethnic, family or cultural traditions. What brings people together is their own dynamics - primarily the sacramental ones - which constitute the only, authentic source of every ecclesial experience.
In the parishes, attended by communities with different languages and rites, many baptisms and hundreds of thousands of communions are administered every Easter and every Christmas, while thousands of young people prepare for the sacraments in catechism classes. Meanwhile, the educational work of the schools contributes to increasing the widespread esteem towards the Christian community.

Missionary realism
The flourishing of the Catholic communities in Bahrain and the Arabian Peninsula was also accompanied and supported by the service of missionaries - nuns, friars, bishops, priests, lay people - who with flexible realism have found ways to guarantee the pastoral care of the baptized by adapting to the environmental context. The annual assembly of Latin bishops in Arab countries in 2014 had suggested to Catholic immigrants to always respect «the culture and traditions of the countries that welcome them». And the bishops-misisonaries in the Arabian Peninsula have always practiced a realistic and non-antagonistic approach towards the established Islamic order, working with patience and discretion to obtain the permits required for the construction of new churches. In front of those who expect to trade the construction of Christian places of worship in those Countries as consideration for the mosques built in the West, according to the formula of the "do ut des", Capuchin Bishop Paul Hinder (Vicar Apostolic Emeritus of Southern Arabia and current Apostolic Administrator of Northern Arabia) long ago repeated that «insisting on reciprocity in the mathematical sense does not work». And his predecessor Bernardo Gremoli (1926-2017), who remained at the helm of the Apostolic Vicariate of Arabia from 1976 to 2015, also insisted that we had to be realistic. And it was not the case to insist on demanding reciprocity on marginal issues. Of the same opinion was the late Comboni Bishop Camillo Ballin, who died due to illness in April 2020 while he was Apostolic Vicar of Northern Arabia. To the questions of those who wanted to point out the contrast between Christianity and Islam, Bishop Ballin replied that in the Countries included in the Vicariate entrusted to him «there are no ongoing persecutions», he repeated that he had never elaborated strategies to convert Muslims to Christianity, and recalled that even in those lands the mission consists in «imitating Jesus».
Respect for the given context connotes the ordinary life of many ecclesial communities in Bahrain as in the rest of the Arabian Peninsula. Many Christians beg for the company and comfort of Christ amidst daily difficulties and sacrifices. They know that forms of proselytism towards Muslims are not tolerated. And that churches cannot have bells to ring or a cross hoisted on the roof.

Shores of Islamic benevolence
The concern to avoid unnecessary conflicts with the mentality and local political apparatuses has often contributed to gaining the condescension and openings of sympathy towards Catholics and their bishops on the part of emirs and authorities who in the Arabian Peninsula exercise their power in ways very far from the Western models.
For decades, except in Saudi Arabia, churches have been built in the Peninsula on land made available by emirs and sovereigns, as happened in Bahrain for the new Cathedral of Our Lady of Arabia, consecrated on December 10, 2021 during a Eucharistic celebration presided over by Cardinal Luis Antonio Tagle (see Fides, 10/12/2021).
In the State of Bahrain, an Emirate that became a Kingdom in 2002, ruled since the 18th century by the royal family of the Al Khalifa under British aegis and became independent in 1971, the Sharia law (islamic law) is the primary source of legislation. The Constitution protects the freedom of conscience and the inviolability of places of worship, but reiterates that these guarantees are exercised in compliance with the customs observed in the country. So, for example, Muslims are in fact not allowed to convert to other faiths, even if no laws have been passed that criminalize conversion. In this pre-established framework, the Sovereigns of the Al Khalifa family have shown effective benevolence towards the Catholic Church and its communities. The Church of the Sacred Heart in Manama, built in 1939 on land donated by the Emir of the time, was the first Catholic place of worship built in the Gulf countries in modern times. In 2008, the current King Hamad Bin Isa Al Khalifa was received in Castel Gandolfo by Pope Benedict XVI, and had invited the Pope to make an apostolic journey to the Kingdom. In the same year, the first Ambassador of Bahrain to the Holy See was accredited. Thirteen years later, on November 25, 2021, King Hamad himself sent a close collaborator to Rome to deliver an official invitation to Pope Francis to visit Bahrain (see Fides, 26/11/2021). In the invitation letter, the Sovereign dwelt on the «fundamental and leading role played by Pope Francis in establishing and promoting interreligious dialogue and understanding between various cultures and civilizations, as well as in spreading the values of human brotherhood and coexistence. among all». The King of Bahrain also expressed to the Successor of Peter his full consent to the Document on Human Fraternity for World Peace and Living Together - signed on February 4, 2019 in Abu Dhabi by the Bishop of Rome and Sheikh Ahmed al Tayyeb, Grand Imam of al Azhar - together with the conviction that on the principles contained in that text one can try to build «a more prosperous future for all humanity».

The intuition of the "missionary bishops" and the Abu Dhabi Document
The adhesion expressed by Monarchs and senior Muslim leaders to the Abu Dhabi Document confirm that the tones and contents of that text signed by the Pontiff and the Grand Imam of Al Azhar have aroused singular resonance and positive feedback in influential sectors of countries with an Islamic majority. A further sign that in that document aimed at promoting coexistence and fraternal collaboration between Christians and Muslims also echoes the realism and intuition that have characterized the recent ecclesial events in the Arabian Peninsula. The basic approach of the Abu Dhabi Document appears in harmony with the pastoral perspicacity of the Catholic bishops who have worked in those lands in recent decades. What has so far worked as a propitious factor to facilitate the life and also the growth of Christian communities in the cradle-lands of Islam. (Agenzia Fides, 2/11/2022)

AFRICA/SOUTH SUDAN - A Church that grows, but with the scourge of tribalism that persists

AFRICA/SOUTH SUDAN - A Church that grows, but with the scourge of tribalism that persists

AFRICA/NIGER - Migrants: the story of those who did not make it and cross the Sahel again to return home

ASIA/INDIA - International Day of Human Fraternity: to wither away the politics of hatred