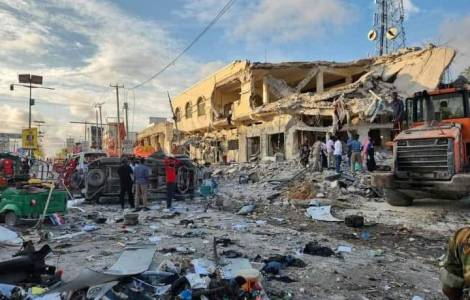 2023-01-04
Al-Shabaab violence continues: "apostate militias and soldiers" in the crosshairs

2022-10-30
The Pope prays for the victims of the attack in Mogadishu. Bishop Bertin: unity is necessary to defeat evil

2022-08-13
Bishop Bertin: the Church is close to the people and takes steps forward in dialogue with the new government

Mogadishu (Agenzia Fides) - "These painful days must unite Somalis to recognize who are the friends and the indifferent people in these difficult times. As we mourn, we will show strength and will to overcome our challenges". This is the cold message from Professor Sonkor Geyre, President of the Institute for Federalism and Security Analysis (IFSA), regarding the claimed attack by Al-Shabaab jihadist militiamen who sowed death among the population from Mogadishu yesterday, Saturday 29 October.
"As we continue to dig in the rubble, the number of victims increases. At the moment we do not know exactly how many there are, reports the professor, but we fear that there are hundreds. The De Martino hospital in the city, made efficient thanks to Italian support, is on the front line to treat the wounded".
According to the reconstruction of events also credited by the Somali authorities, Al-Shabaab jihadists detonated a first bomb which attracted the population, as well as police and emergency vehicles, then detonated another which resulted in an unknown number of victims among civilians, police forces and government officials.
Pope Francis, after the Marian Angelus prayer today, Sunday, October 30, said: "As we celebrate Christ's victory over evil and death, let us pray for the victims of the terrorist attack in Mogadishu which killed more than a hundred people, including many children. May God convert the hearts of the violent".
Msgr. Giorgio Bertin, Bishop of Djibouti and Apostolic Administrator of Mogadishu, reached by telephone by Agenzia Fides, referred to the government's attempts to establish a dialogue with the rebels in recent weeks.
"Unfortunately", underlines Bishop Berdin with sadness, with the attack inside the country, all hope of positive evolution seems to have vanished. An attack also made to show that the rebels can hit the institutions in the capital and destroy what the population with the government are trying to rebuild". Bishop Bertin stresses that this emergency worsens a situation already made untenable by drought and other natural disasters. "Now the rebels are not just hitting military targets, they are attacking the people. I hope the people will unite with political institutions to defeat this evil."
Today's tragedy brings back memories of the terrible explosion that rocked Mogadishu in 2017, killing hundreds of women, children, shopkeepers: an explosion that took place in the same neighborhood, on the same day and at the same time as the massacre of Saturday, October 29. (GF) (Agenzia Fides, 30/10/2022)

ASIA/CHINA - Chinese bishops and the People of God pray for Pope Ratzinger: may he continue to intercede for the good of our Church from heaven