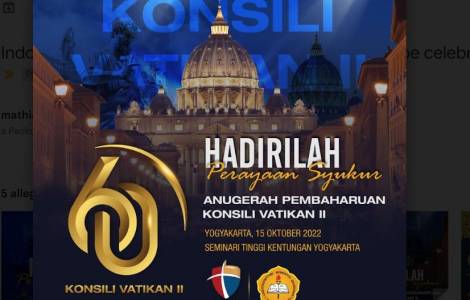 2023-01-25
Indian Jesuit Father has been living in Sumatra for 50 years: a life marked by devotion to Mary and love of God

2023-01-18
Love for the environment and witness in the midst of earthquakes: the life of Camillian seminarians with the parishioners of Maumere

2023-01-11
Earthquake on the archipelago: fear but no major damage for the Camillians on the island of Flores

2022-12-17
Appointment of the Bishop of Tanjungkarang, rev. Vinsensius Setiawan Triatmojo

2022-11-23
Serving the poor, in harmony with Muslims: living faith in Christ in Indonesia

2022-11-17
Proclamation of the Gospel and works of solidarity: a popular mission in North Kalimantan

Jakarta (Agenzia Fides) - The 60th anniversary of the Second Vatican Council is commemorated in Indonesia with two special meetings today, October 15: one at the Faculty of Philosophy and Theology of the "Sanata Dharma University" and the other at St. Paul Major Seminary, both in the city of Yogyakarta, in the diocese of Semarang, on the island of Java. A Eucharist celebrated on the spot will be attended by two former bishops of the university and the Seminary, Msgr. Petrus Boddeng Timang, of the diocese of Banjarmasi (in southern Kalimantan) and Msgr. Justinus Harjasusanto of the Archdiocese of Samarinda (in East Kalimantan).
After the mass, an interreligious round table will discuss the fruits of the Second Vatican Council and its application in the context of the Indonesian Church. As Fides learned, there will be the former mayor of Surakarta, Hadi Rudyatmo, and MP Esti Wijayati, two Catholics involved in politics; professor. Al Makin, Dean of the National Islamic University of Yogyakarta; professor Mudji Sutrisno SJ, a Jesuit priest engaged in the pastoral care of culture, arts and education; Bishop Petrus Boddeng Timang of the diocese of Banjarmasin.
Indonesian Cardinal Ignatius Suharyo Hardjoatmodjo, Archbishop of Jakarta and President of the Episcopal Conference of Indonesia, in view of the 60th anniversary of the Second Vatican Council celebrated in Yogyakarta, published a pastoral message in which he declared: "The celebration of the anniversary of the Second Vatican Council is an opportunity to focus on some of the teachings of Pope Francis on the joy of the Gospel, human dignity and climate change. I want to emphasize the importance of promoting human dignity and maintaining a sense of community in society".
"I welcome the initiative of former students of the Faculty of Theology of Sanata Dharma University - continued Cardinal Suharyo - in commemorating the 60th anniversary of the Second Vatican Council. It is a good step for our ecclesial community to discover the will of God in today's complicated society". To do this, continues the Cardinal, we must follow the path indicated by Pope Francis with the synodal process: "It is not just a question of walking together, but of realizing together, all the people of God, a profound discernment of the spirit. The Church can thus discover what the Lord wants so that we can all walk on a good path towards God, being ready to create unity among us: the fruit will then be the mission, that is, the testimony of faith".
Other Indonesian Bishops issued pastoral messages recalling the anniversary of the Second Vatican Council to emphasize that in Indonesia, a Muslim-majority nation, the changes introduced by the Council in the Church were particularly felt and evident, especially with regard to concerns the approach to interreligious dialogue. (MH) (Agenzia Fides, 15/10/2022)