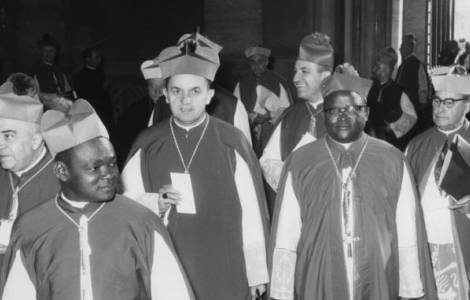 by Gianni Valente
Rome (Agenzia Fides) - «We thank you, Lord, for the gift of the Council. You who love us, free us from the presumption of self-sufficiency and from the spirit of worldly criticism. Prevent us from excluding ourselves from unity. You who lovingly feed us, lead us forth from the shadows of self-absorption», said Pope Francis at the end of his homily delivered during the Eucharistic liturgy he presided over on Tuesday, October 11 in St. Peter's Basilica, on the occasion of the 60th anniversary of the opening of the Second Vatican Council.
For 60 years, the last Council, an important event in the life of the Church, has been at the center of debates on hermeneutical interpretations of its nature and implications. Disputes that at times risk becoming controversies among experts, fatally exposed to what Pope Francis in his homily called «the diabolical artifice of polarizations, of "isms"».
At the origin of the Second Vatican Council there was the desire to renew the inner life of the Church and also to adapt her discipline to the new exigencies so as to repropose with renewed vigour the requirements of her mission in the modern world. And if one wants to understand the path proposed by the Second Vatican Council for liberating church action from the «presumption of self-sufficiency» and from the «precincts of self-referentiality», it is always worth taking a look at the conciliar documents that emerged as the ripe fruit of this great church assembly .
The title and the first lines of the Conciliar Dogmatic Constitution Lumen Gentium, devoted to the Church, are illuminating in their clarity and simplicity: «Christ is the Light of nations. Because this is so, this Sacred Synod gathered together in the Holy Spirit eagerly desires, by proclaiming the Gospel to every creature, to bring the light of Christ to all men, a light brightly visible on the countenance of the Church». From the very first words, the most important document of the last Council repeats that the Church does not shine with her own light, but can only shine with the light of Christ. «The Church is profoundly convinced of it: the light of the Gentiles radiates not from her, but from her divine Founder: yet, the Church well knows, that being reflected on her countenance, this irradiation reaches the whole of humanity», wrote the Belgian theologian Gérard Philips, who was himself chief editor of this conciliar constitution, in his commentary on “Lumen Gentium”.

The perception of the Church as reflection of the light of Christ unites the Second Vatican Council to the Fathers of the Church, who from the early centuries made use of the image - often also taken up by Pope Francis - of the mysterium lunae, the mystery of the moon. Like the moon, «the Church does not shines by its own light, but by that of Christ» ("fulget Ecclesia non di lei sed Christi lumine"), says St. Ambrose. While for Cyril of Alexandria «the Church is bathed in the divine light of Christ, which is the only light in the realm of souls. There is therefore one single light: in this single light, however, the Church also shines, but it is not Christ himself however».
In this regard, a thought deserves attention that the historian Enrico Morini made a few years ago in a contribution he published on the website edited by Sandro Magister. According to Morini – Professor of the History of Christianity and the Church at the University of Bologna – the Second Vatican Council set itself «in the perspective of absolute continuity with the tradition of the first millennium», that «of the Church of the seven Councils, still undivided». Encouraging the renewal of the Church - Morini added - «the Council did not intend to introduce something new - as progressives and conservatives respectively desire and fear - but to get back to what had been lost».
Morini's observations were echoed by Cardinal Georges Marie Cottier (1922-2016), the great Dominican priest and theologian who as Theologian of the Pontifical Household had served John Paul II and Benedict XVI, had been taken up and further developed. In an article published in August 2011 in the magazine 30Giorni, Cardinal Cottier explained that he considers the interpretations that sees the history of the Church «as a progressive decline and a growing estrangement from Christ and the Gospel», or those according to which "the dogmatic development of the second millennium does not conform to the Tradition shared during the first millennium by the undivided Church» as a “historiographic myth”. It must therefore be regarded as an "objective fact" that the conception of the church as expressed in Lumen Gentium corresponds to that which was already generally shared in the first centuries of Christianity: namely, that the church is not seen as an independent, preordained Subject is assumed. Having made these clarifications, the Dominican theologian identified the point of full correspondence between the perception of the Church as expressed in Lumen gentium and that already shared in the early centuries of Christianity. In both cases - underlined Cottier - «the Church is not assumed as a subject in itself, as pre-established. The Church keeps to the fact that her presence in the world flourishes and perdures as a recognition of the presence and action of Christ». Starting from this perception, the Cardinal drew precious consideration also with regard to the criteria that must guide the mission of the Church throughout history. «If the Church perceives herself in the world as a reflection of the presence of Christ - emphasized Cottier - the preaching of the Gospel can only be done through dialogue and freedom, in the abandonment of all means of coercion, both material and spiritual». And the Church also asks for forgiveness - the Dominican theologian added - «not in line with the logic of worldly honor, but because she recognizes that the sins of her sons dim the light of Christ that she is called to reflect in her countenance».
In his reflections, in which he also also cited Pope Ratzinger, Cardinal Cottier pointed out that the very recognition of the "mysterium lunae" that the Church produces can liberate apostolic action from false perspectives that see the presence of Christians in the world as «product of strategies and prescriptions». Perhaps, in today's world - concluded Cottier - it would be easier and more comforting for everyone to listen to pastors who speak to everyone without presupposing the faith. As Benedict XVI recognized during his homily in Lisbon on 11 May 2010, "often we are anxiously preoccupied with the social, cultural and political consequences of the faith, taking for granted that faith is present, which unfortunately is less and less realistic"». (Agenzia Fides, 13/10/2022)

ASIA/IRAQ - Chaldean Patriarchate: the use of Arabic in the liturgy is not a "betrayal" of Tradition

VATICAN - Funeral of Benedict XVI: "we too have come with the fragrance of gratitude and the balm of hope"