ASIA/VIETNAM - "Strengthening communion", central theme of the new pastoral year in the Church of Vietnam 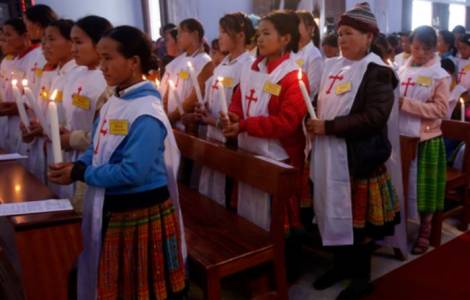 2022-11-29
Going out of oneself to meet God and neighbour: the mission of young people, who are not afraid to touch misery, poverty and violence

2022-10-24
New Catholic church in the north-east of the country, among the "hill tribes": state media reports

Hanoi (Agenzia Fides) - "Strengthening communion" is the central pastoral theme indicated by the Bishops of Vietnam for the Vietnamese Church in the year 2023. This is what we read in the "General Letter to the community of the People of God" that the episcopate released at the conclusion of the assembly held from 3 to 7 October in Hanoi, bringing together the Bishops of 27 dioceses of the country. The letter sent to Fides, signed by Bishops Joseph Nguyen Chi Linh, President of the Vietnamese Bishops' Conference, and by Peter Nguyen Van Kham, Secretary General of the Conference, invites all Christian communities to live a spirit of communion and synodality, according to the synodal journey announced by Pope Francis, which all 27 Vietnamese dioceses are following. "The consultation meetings of the People of God took place at the parish, district, religious and diocesan levels. A large number of believers enthusiastically participated in this process. The synodal process gives us an overview of the life of the Catholic Church in Vietnam", it highlights.
The synodal spirit, then, should not be limited to a given period of time: it "needs to be continued and promoted in the life of the local Church", the Bishops affirm, defining the pastoral program for the next three years: in 2023 the Church intends to "strengthen communion"; 2024 will focus on promoting participation in community life; in 2025 the main theme will be "Proclaiming the Gospel together".
Dwelling on the pastoral year that has just begun, in order to "strengthen communion", the text recommends some pastoral and spiritual practices: "Communion among believers is built on the foundation of the Word of God. It is necessary to promote personal reading of the Bible, sharing the Word of God in families or in small groups, so that the Word of God permeates life".
It is then said that "the Eucharist is a source of communion. When we receive the Body and Blood of Christ, we are in communion with the Lord and united (cf. 1 Cor 10: 16-17). Therefore, it is necessary that the faithful participate actively at Mass, thus strengthening their communion with the Lord and with each other in the Lord. It is also necessary to help the faithful to understand the Liturgy better, as Pope Francis wishes in his Apostolic Letter on Liturgical Formation for the People of God (Desiderio Desideravi), of June 29, 2022".
Finally, the Vietnamese Prelates argue, "communion in the Church is also expressed through mutual affection, sincere listening in community and through acts of charity among the faithful and towards others, with brothers and sisters who do not share the same faith". This is why it is important to "take care of the elderly, people with marriage difficulties, people with disabilities, the poor, ethnic minorities, brothers and sisters who live far from home and the victims of natural disasters". "Charity is at the heart of Jesus' teaching. He teaches us: when we help the poor, we help the Lord himself (cf. Mt 25: 31-46)", notes the Letter.
A mention is also addressed to the means of communication and new technologies which can create damage by publishing unverified content, fueling disinformation. "Those who work in the mass media should pay attention to conscience and ethics, following the principle: proclaim the Truth in Charity. Communication must be a means to connect people in friendship", states the text.
"We are called to constant conversion. Conversion is an essential condition to know how to meet, listen and discern according to God's will. Let us pray so that believers throughout the world are permeated by a spirit of unity, to live Faith together and build the Mystical Body of Christ", conclude the Bishops of Vietnam. (PA) (Agenzia Fides, 8/10/2022)

ASIA/BANGLADESH - Giving one's life to Christ to be happy. The testimony of five consecrated sisters

ASIA/PHILIPPINES - Christmas, a time to listen, dialogue, walk together, pray with "Simbang Gabi"