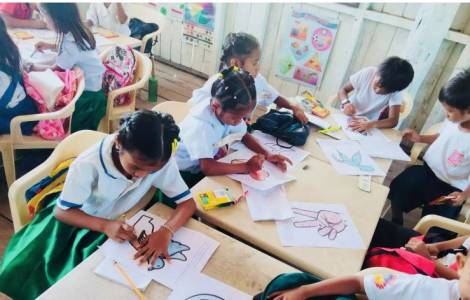 Zamboanga del Sur (Agenzia Fides) - In the South of the Philippines, especially among the poorest and most disadvantaged families, mistrust, prejudice and suspicion between Muslims and Christians can creep into families. For this reason, the Movement for Islamic-Christian dialogue "Silsilah" (which means "chain"), founded in the South of the Philippines by PIME missionary Father Sebastiano D'Ambra, confirms and resumes its educational commitment with the aim of "being in solidarity with all people in reaching the poorest, in building a just and ecologically healthy human society", says a note sent to Fides by the Movement.
The note takes stock of more than thirty years of educational commitment, based on promoting the spirituality of dialogue in four pillars: dialogue with oneself; dialogue with God; dialogue with others; dialogue with Creation.
The first "Silsilah School" was built on the island of Santa Cruz in 1989, precisely to facilitate access to education for poor families, mainly of Islamic faith. A few years later, other institutes or campuses were opened in the different communities of Zamboanga such as in Pitogo, Baluno, Mampang, Paniran and Sant Catalina. Silsilah Schools have received recognition from the Department of Education, Culture and Sports, now called the Department of Education, as private educational institutions.
"Our school operates in the spirit of building bridges and serving people, which is the central essence of the spirit of dialogue and peace. Education is a way to promote the culture of dialogue, a path to peace that plays an important role in the development of an integral education of the students", indicates the note of the Movement.
In the post-Covid era, institutions face several problems: According to research by UNICEF, an estimated 27 million students in the Philippines lost more than a year of in-person learning due to the pandemic. "This crisis has been a real challenge for our country's education system. This has made us realize how important it is to make learning easy and accessible to all".
In the 2022-2023 school year, the "Silsilah Elementary School" has fully resumed its teaching activities. The main campus of the Silsilah Elementary School is located near the famous "Pink Beach" of Zamboanga City. "Teachers live their professional commitment as a mission because they want to serve the community, despite the challenges they face. Their mission is not only to impart knowledge, but also to teach children to be respectful and welcoming, to build peace through dialogue to help change their own lives, those of their families and the whole community," explains Silsilah. "We try to integrate the values in all areas of learning. In the educational process, we can realize and promote what the Silsilah movement wants, especially in bringing people, Christian or Muslim, back to God, experiencing spiritual harmony and peace between Muslims, Christians and people of other beliefs. Our teachers are truly passionate and strive to live what they teach in their daily lives", explains Father Sebastiano D'Ambra.
The Italian missionary recalls that teachers have a profound influence on children and young people, which goes beyond class hours: "They help to form and inspire the minds of young people, influencing their hearts and souls. They help others to learn as a gift, without expecting anything in return. This is one of the most beautiful things about teaching, an area in which Silsilah continues to work", he concludes.
The Islamic-Christian movement "Silsilah" has been active since 1984 in the southern Philippines, an area where a large percentage of the Muslim population is concentrated. In a nation with 110 million citizens, 90% of whom are Catholic, some 6 million people profess the Islamic religion and are grouped mainly in the "Bangsamoro Autonomous Region", a territorial entity that includes six provinces in the southern Philippines: Basilan, Lanao del Sur, Maguindanao, Sulu and Tawi-Tawi. (PA) (Agenzia Fides, 7/10/022)

AMERICA/DOMINICAN REPUBLIC - Birth of the Association of Catholic Universities, for a greater presence of the Church in society