AFRICA/SOUTH SUDAN - Vocation is a mystery: sharing the Word of God with those who have never heard it 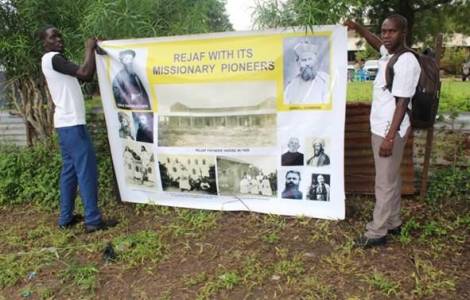 2022-12-13
Overcoming Ethnic Conflicts: Education as an Instrument of Peace

2022-12-06
Upper Nile: More than six thousand people forced to flee after the assault on the Aburoch reception camp

Juba (Agenzia Fides) - Simplicity and kindness, a sense of belonging and above all, the way of welcoming people, listening to them and trusting them are some of the characteristics that inspired a young missionary to join the Comboni.
Tap Simon Yomkuey is a Comboni missionary from South Sudan who made his first religious vows on May 23, 2020. "Why did I decide to become a Comboni Missionary? A vocation is a mystery", he said. “I always perceived from the Comboni Missionaries that I met in my parish in Bahry, an element of equality, no one considered themselves greater than the others, and this motivated me to join them. My dream is to share the Word of God with those who have not yet had the opportunity to hear it. Reach out to those who are abandoned and disowned, such as those living in slums. We must help them resolve their condition of abandonment and confront those who seek to isolate them from society. People must understand that we are all the same, although with different talents. The only difference is how we use them. Those who consider themselves superior to others must understand that God is behind their success".
"During these years - continues the missionary - I have learned to live with people of different origins, cultures and ideas. I have also learned much from their sacrifices. When I think of our founder Daniele Comboni, I can perceive his passion for bringing the Word of God to those who had never heard of him; he sacrificed a lot and put himself in the place of others".
In Juba, Simon met Fr. Luigi Okot, the Comboni Provincial of South Sudan, who involved him in a year-long program called 'Come and See', during which, every last Saturday of the month, they met with many aspirants, boys and girls, in the provincial house. "They talked to us about vocations, providing brochures on Comboni's life and other materials. After a year, in 2014, I was admitted to the six-month pre-postulancy, followed by a parish experience. I then moved to Nairobi for postulancy, where I did a three-year philosophy course, followed by a two-year novitiate in Namugongo, Uganda. After the novitiate, I was assigned to the scholasticate in Pietermaritzburg, South Africa. I couldn't visit my family – I haven't seen them since 2018 - because Uganda was under Covid lockdown. While I was waiting, I took the opportunity to stay with the Comboni community that assists the displaced South Sudanese in Uganda. When the borders finally opened, I went back to Juba and, before South Africa could close them again, I entered the country". (AP) (Agenzia Fides 7/10/2022)