AMERICA/PERU - Mining, with respect for Creation and human rights, builds progress and development not only economic 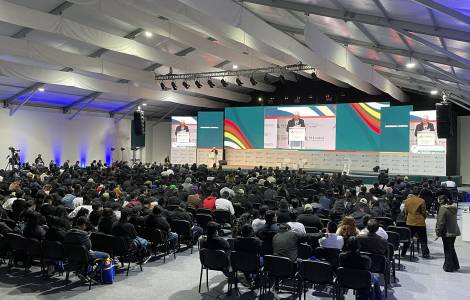 2022-11-23
Thousands of Venezuelans, Haitians and Ecuadorians face "the hell of Darién" in order to escape poverty and violence

2022-11-21
Dialogue and hope for peace: talks with the ELN resume in Caracas, the IX Reconciliation Congress in Bogota

2022-10-14
After the opening of the borders: Bishops of Venezuela and Colombia discuss migration and warn of a humanitarian crisis

Arequipa (Agenzia Fides) - Promote responsible practices that aim to care for the human person, correctly using natural resources, according to clear commitments of social responsibility and preferential option for the poor: this is in a few words the call of Monsignor Miguel Cabrejos Vidarte, President of the Peruvian Episcopal Conference (CEP) and the Latin American Episcopal Council (CELAM), in his speech delivered during the most important Mining Conference in Peru, called PERUMIN 2022, which took place in Arequipa from September 26 to 30 .
The Archbishop based his speech on the principles of the Social Doctrine of the Church and the Magisterium of the last Popes on the dignity of the human person, the common good, the universal destination of goods, participation, solidarity, the option for the poor, gratuitousness and care for Creation. "All these aspects - he underlined - are interconnected, none is autonomous".
"The good Father God created the earth for the wise and responsible use, enjoyment and care of human beings", he said in his report, stressing that human beings have not been granted permission to "abuse the land and its goods". According to the Catholic faith, every man and woman are children of God. "Adopted children because Jesus Christ made us his brothers by assuming the human condition in the Incarnation. This is the foundation of the dignity of the human person and his rights", he reiterated. In this plan, work has a special importance: "It is not enough to have a job, it is necessary that the working conditions and environment are worthy of the children of God". A second aspect is to create the conditions "to establish quality working relationships".
Next, Msgr. Cabrejos focused on the responsible use of mineral resources, which are a free gift from God not only for Adam and Eve, but for all the generations that have existed, exist and will exist.
The Church respects the social order, "but at the same time emphasizes that before private property there is the universal destiny of goods and the common good". Therefore, it must be remembered that "the uncontrolled exploitation of natural resources has harmful effects for the population of the mining centers and for the population that lives near the mining areas and causes great damage and effects on the environment."
The extraction of minerals is of great economic importance for Peru, crucial in the construction of progress, development and the common good of the country, understanding development not only as "economic growth", but as integral development of the human person, as quality of life.
A related aspect that the Archbishop focused on was social responsibility and transparency, always considering the preferential option for the poor, which means "recognizing them as people who have capacities, but who have not had the opportunity to develop them or that their rights be recognized". In this sense, it is necessary to combat illegal mining and work for the formalization of small-scale mining and artisanal mining, so that the poor are no longer considered a burden and their communities can improve their quality of life.
Citing "Querida Amazonia" he reiterated that "mining projects must take into special consideration their social responsibility towards indigenous peoples and their cultures", and that the orientation of mining activity towards the common good, "implies the growing responsibility of all economic and social actors" that should be involved.
After insisting on the importance of transparency, the Archbishop of Lima cited the conclusions of the Working Group for the "Vision of Mining in Peru": "In 2030, mining in Peru will be more inclusive, social, environmental and territorially integrated, within a framework of good governance and sustainable development. Over time, it has established itself as a competitive and innovative activity that is appreciated by the whole of society". (SL) (Agenzia Fides, 3/10/2022)

AFRICA/GHANA - Exploitation and environmental damage: “We must fight the problem of illegal gold diggers together”