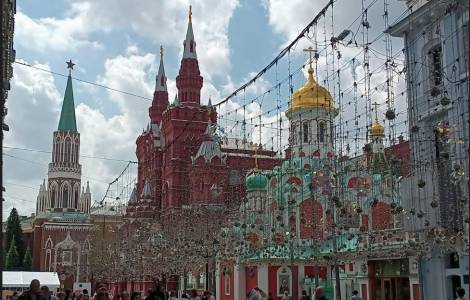 2022-12-02
Feed the hungry. Sprouts of Franciscan mercy in the freezing Russian winter

2022-10-26
"Ecumenism of blood". In Moscow the memory of martyrs unites Christians of different confessions

2022-10-08
In Moscow people pray for peace, according to the intentions of the Pope

2022-09-29
Catholic Bishops in Russia: war has never been nor will it be a means of resolving problems between nations

2022-09-12
From Russia to Kazakhstan, on pilgrimage with the Successor of Peter

Moscow (Agenzia Fides) - "The harsh confrontation in Ukraine has degenerated into a large-scale military conflict that has already caused thousands of victims, has undermined trust and unity between countries and peoples and threatens the existence of the whole world. (...)
We wish to follow the teaching of the Church, according to the Gospel and the Tradition of the ancient Church: war has never been nor will it be a means of solving problems between nations; "Nothing is lost with peace, everything can be lost with war" (Pius XII, 1939)". Thus begins the appeal of the Conference of Catholic Bishops of Russia in relation to the declared partial mobilization in the Russian Federation. The appeal, published yesterday and signed by Paolo Pezzi, Metropolitan Archbishop of the Mother of God in Moscow, on behalf of the Bishops' Conference of Catholic Bishops in Russia, offers some guidelines for the Catholic lay and religious faithful of Russian nationality, who today find themselves having to make difficult choices. In the appeal, among other things, it is recalled that the Constitution of the Federation protects those who repudiate the use of weapons for reasons of conscience. While confirming the impossibility of taking a different course, aimed at avoiding more bloodshed, the bishops ask that the words of Pope Francis in Nur-Sultan, during his recent apostolic trip to Kazakhstan, be taken into account: "Let us not get used to to war, let us not resign ourselves to the inevitable. Let us help those who suffer and insist that peace be truly achieved. What must still happen, what number of deaths must we expect before rivalries give way to dialogue for the good of the people, of the peoples and of humanity? The only way out is peace and the only way to reach it is through dialogue". The Bishops' Conference says it is aware of the need for governments, in certain situations, to resort to the use of weapons and to ask citizens to fulfill their duty for the homeland and for the common good, specifying: "What has been said is true if military action is aimed at putting an end to the conflict as soon as possible and avoiding the multiplication of victims". The document also indicates as a reference text to understand this passage of paragraph III of Article 5 of the Catechism of the Catholic Church (2302-2317), which admits recourse to war only for legitimate defense and only in the event that certain conditions occur. In this regard, the Bishops' Conference underlines that the ultimate decision on whether or not an individual citizen participates in war is a question that concerns the sacred dimension of his own conscience. He also recalls that both the teaching of the Catholic Church (Catechism, §2311) and the third paragraph of Article 59 of the Constitution of the Russian Federation protect those who, for reasons of conscience and religious belief, reject the use of weapons. The reminder comes after the official announcement on September 25 on the government portal "Ob"jasnjaem.ru", a service that answers the most frequently asked questions of Russian citizens, which has declared it impossible for conscientious objectors to perform community service alternatives during the mobilization, in fact denying a legal option other than sending the calls to arms to the front in the current phase of partial mobilization. As for Catholic religious, the Bishops' Conference recalls that their participation in the war is categorically prohibited, both by the Tradition of the Church of the first centuries and by the international conventions in force. According to information sent to Fides, several Russian Orthodox priests have been summoned in recent days to military police stations. Their non-enlistment has not been justified by their status as religious, but by reference to other requirements incompatible with the guidelines received so far from recruiting offices. The document concludes with an appeal to all Catholics in Russia to pray and fast "for peace" and for priests to offer the celebration of masses with specific prayers for the same purpose. (CD) (Agenzia Fides, 29/9/2022)