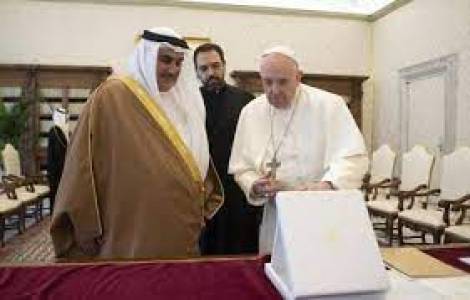 2021-12-09
"Civil inauguration" of the Cathedral of Our Lady of Arabia, in the presence of Cardinal Tagle

Rome (Agenzia Fides) - Pope Francis will make his announced Apostolic Journey to the Kingdom of Bahrain from November 3 to 6. This was announced today by the Director of the Holy See Press Office Matteo Bruni, adding that the Bishop of Rome will visit the cities of Manama and Awali on the occasion of the Bahrain Forum for Dialogue: East and West for Human Coexistence.
The papal visit to Bahrain will take place less than a year after the delivery of the official letter of invitation sent to Pope Francis by King Hamad bin Isa al Khalifa. The invitation letter was delivered to the Pope by Sheikh Khalid bin Ahmed bin Mohammed Al Khalifa, His Majesty's Advisor for Diplomatic Affairs, received on Thursday, November 25 2021 in the Vatican by both the Bishop of Rome and Cardinal Secretary of State Pietro Parolin (see Fides, 26/11/2021). During his visit to the Vatican, the envoy of the Bahraini monarch also conveyed to the Pope greetings and greetings expressed by King Hamad, together with his appreciation "for the fundamental and leading role played by Pope Francis in establishing and promoting interreligious dialogue and understanding between the various cultures and civilizations, as well as in spreading the values of human fraternity and coexistence among all". On that occasion, through his envoy, the King of Bahrain also expressed to the Successor of Peter his full consent to the Document on Human Fraternity for World Peace and Living Together, signed on February 4, 2019 in Abu Dhabi by Pope Francis and Sheikh Ahmed al Tayyeb, Grand Imam of al Azhar.
The territory of the Kingdom of Bahrain consists of an archipelago of 33 islands near the western shores of the Persian Gulf. The nation, ruled by the royal family al Khalifa, was previously an Emirate, which became a constitutional monarchy in 2002.
According to the subdivision of the ecclesiastical circumscriptions of the Catholic Church, Bahrain is part of the Apostolic Vicariate of Northern Arabia, together with Qatar, Kuwait and Saudi Arabia. Bahrain established diplomatic relations with the Holy See in 1999. The first Catholic church erected in modern times in the Persian Gulf is the one dedicated to the Sacred Heart and built in 1939 in the Bahraini capital Manama on land donated by the Emir of Bahrain.
In 2013 (see Fides, 13/2/2013) the Catholic Church had received as a gift from King Ahmad bin Isa another land of 9 thousand square meters in the municipality of Awali, where work for the construction of the Catholic cathedral in the Kingdom began in the spring of 2014, named after Our Lady of Arabia. The cathedral was consecrated on December 10, 2021 during a consecration liturgy presided over by Cardinal Luis Antonio Tagle. On that occasion, the Cardinal began his homily by thanking the Sovereign Hamad bin Isa al Khalifa on behalf of Pope Francis and the Catholic community in Bahrain "for having maintained the tradition of the royal family in the support offered to the Catholic Church, and for having donated the land on which this church stands" (see Fides, 10/12/2021). The Cathedral of Our Lady of Bahrain currently represents the largest functioning church in the Arabian Peninsula. During the consecration liturgy, Cardinal Tagle had also remembered with gratitude Bishop Camillo Ballin, whom he defined as a "great man and great missionary", who had started the construction project of the church, and passed away in 2020 before seeing it completed. On the same day of the cathedral's consecration liturgy, Cardinal Tagle himself delivered a letter from Pope Francis to King Hamad bin Isa al Khalifa. During his meeting with Cardinal Tagle, King Hamad had affirmed that the consecration of the new cathedral that just took place embodied "the civilization and humanitarian role of Bahrain", a Kingdom that has hosted non-Muslim places of worship "for many decades", also demonstrating in this way "tolerance, love and respect of his people for all".
The Catholic community present in Bahrain is made up mostly of immigrants who have come to the Kingdom to look for work. It is estimated that the Catholic community in Bahrain is made up of at least 80 thousand baptized, but in reality there are no reliable data regarding its numerical consistency. (GV) (Agenzia Fides, 28/9/2022)

VATICAN - Cardinal Parolin: an agreement on aspects essential to daily life of Church in China