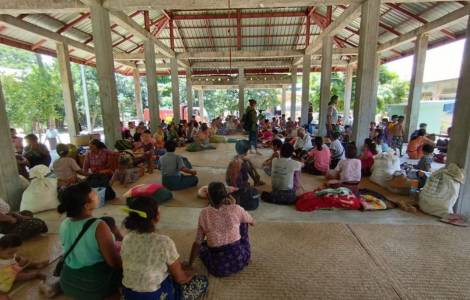 Mandalay (Agenzia Fides) - "A year and a half after the coup of February 1, 2021, when violence is raging especially in certain areas, it is difficult to see a way out of this conflicting situation. But we believers, we have the Lord God on our side, we trust in Him and we encourage the faithful not to lose hope and trust", says in an interview with Agenzia Fides the Archbishop of Mandalay, Marco Tin Win , still afflicted, like the whole local community, by the massacre of Sagaing, a town in his diocese where, on September 16, at least 11 children died following an airstrike by the regular army on an area populated by civilians.
The Archbishop notes that "the conflict continues: on the one hand, the army has strategic capabilities and heavy weapons, on the other hand, there is strong resistance from the population expressed in the People's Defense Forces. I can say that half of the territory of the Archdiocese of Mandalay is affected by the fighting. The people are suffering. There are many internally displaced people, Christians and Buddhists, and we have set up five centers for displaced persons in five Catholic parishes; we are doing what we can to help alleviate the suffering".
On the fact that the bombings also affect pagodas, churches and schools, the Archbishop explains: "Churches, monasteries, schools continue to welcome destitute and desperate people. Sometimes the military hit places of worship due to the suspicion that the resistance forces hide there".
Msgr. Tin Win notes the discouragement that also permeates the population of the baptized and declares: "It is difficult to see a light in this darkness, in the precariousness, in the fatigue of living on a daily basis. For more than 50 years, the war was experienced and felt only by the people of the ethnic groups in the outlying areas, who fought the army. Today, we all feel it and experience it on our skin, even in the cities. That is why a greater unity has grown among the people of Myanmar, even among people from different ethnic groups. People today understand and share the suffering of others, which generates empathy and solidarity".
For the baptized, moreover, "faith in particular is a source of grace and strength. Faith tells us that there is a grace that God gives us even in this suffering. The churches, despite the danger, are full. People go to church and pray intensely, feeling a deep spiritual comfort that only God can give. The faithful gather to pray the Rosary every day, and are busy serving others, especially the sick, the wounded or the most vulnerable. This strength comes from the Lord. Priests and religious accompany families and communities in their precarious condition, they walk with them, they are like Jesus with the disciples of Emmaus. We are at your sides," they tell refugee families. This self-sacrifice is also observed by Buddhists. This closeness is for us a means of evangelization in a very difficult time". (PA) (Agenzia Fides, 23/9/2022)

ASIA/INDONESIA - In October, pilgrimages to Marian places flourish throughout Indonesia

EUROPE/RUSSIA - In Moscow people pray for peace, according to the intentions of the Pope

ASIA/LEBANON - Maronite bishops: Lebanon risks being reduced to a "battlefield" for the wars of others