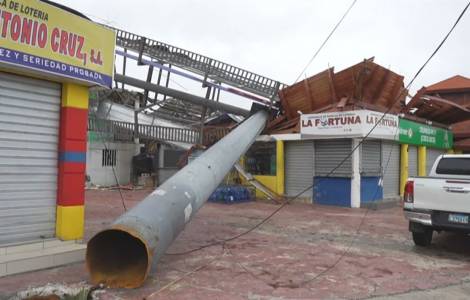 2022-07-27
On August 15, the closing celebrations of the Altagracian Jubilee Year

2022-07-18
The Virgin of Altagracia, "source of unity in difficult times, a sure hand that supports in setbacks"

2022-05-25
The Minister of the Environment to the Pastoral Commission for Ecology: working together to defend the common home

2022-02-26
The Bishops on the occasion of Independence Day: "Let the truth come out for the good of the nation"

2022-01-20
The Bishops: "St. Joseph supports us in our daily struggles, no one like him knew how to go through difficult times"

Santo Domingo (Agenzia Fides) - Hurricane Fiona, which hit the Caribbean with torrential rains and very strong winds, caused catastrophic damage and at least two deaths in Puerto Rico on Sunday, September 18, before hitting the coast of the Dominican Republic two days later, putting out of use the island's power plants. More than a million people were left without electricity and two hundred thousand without water. Landslides, blocked roads, fallen or damaged trees and power lines are part of the destruction.
The hurricane, which has hit the entire east and northeast of the Dominican Republic, has so far claimed one life, one person hit by a tree uprooted by strong winds. According to a provisional report of the local Caritas, released by CELAM, 54 homes have been damaged, 798 people have been relocated to safe areas, 38 shelters have been set up to accommodate 723 people, four international airports are closed and the Nagua-Sánchez highway it is blocked by falling trees. The start of the school year in public schools has been postponed and university education has also been suspended. In addition, there is significant damage to the tourism and agricultural sectors, which will be assessed when conditions allow. The level of damage is undoubtedly much higher than what has been reported so far and the recording of information continues.
Pope Francis, through the Secretary of State, Cardinal Pietro Parolin, has sent a telegram of solidarity to Monsignor Rubén González, president of the Episcopal Conference of Puerto Rico, and to Monsignor Freddy Bretón, president of the Dominican Episcopal Conference, after the passage of the hurricane.
"The Holy Father, deeply distressed to learn of the natural inclemencies that have hit the island in recent hours due to Hurricane Fiona, raises his fervent prayer to the most merciful Father", reads the telegram. The Pope is saddened by "the unfortunate loss of human life, as well as by the numerous victims and the material damage" asking "the entire Christian community and people of good will to increase solidarity to help those affected by this calamity".
According to the latest Statistical Yearbook of the Church, Puerto Rico has 3,195,000 inhabitants of whom 2,706,000 are Catholics; the Dominican Republic has 10,448,000 inhabitants, of whom 9,941,000 are Catholics. (SL) (Agenzia Fides, 22/9/2022)

ASIA/CHINA - National Catholic Collection Day, an expression of the synodal journey in charity

AMERICA/BRAZIL - Petropolis launches urgent call for help after the storm