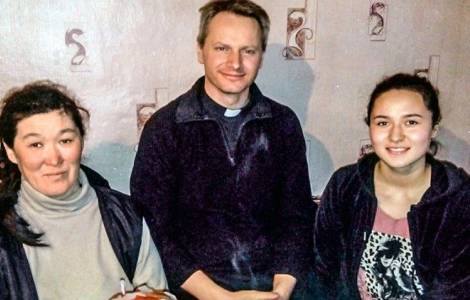 Korneevka (Agenzia Fides) - "It was very enriching to see the enthusiasm with which not only the few Catholics in Kazakhstan have prepared the visit, but also the authorities of the country, which has a 75% Muslim population". Thus, Father Leopold Kropfreiter, director of the Pontifical Mission Societies (PMS) in Kazakhstan, shares with Fides the suggestions and reflections that have marked the local Catholic community during the preparation and then the development of the recent Apostolic Journey of Pope Francis to Kazakhstan (September 13-15).
"We have experienced a lot of benevolence and interest. Many Kazakhs have only known the Catholic Church on the occasion of the preparations for this important trip. The media themselves had to first learn who the Catholics are in order to be able to report", continues Father Kropfreiter.
"Messengers of peace and unity" was the motto of the Apostolic Journey, whose logo was designed by a young Catholic artist, Marina Mun, who grew up in Karaganda, central Kazakhstan, and who now lives in Almaty, in the South of the country. To compose the logo, the artist used elements typical of Kazakhstan, such as the shanyrak, a cross-shaped emblem that sits on top of the traditional Kazakh dwelling, the yurt. The shanyrak symbolizes prosperity, but also the "common home". And for Christians, it can remind them of the mystery of the cross, a sign of the redeeming love of God who calls us together in his Church: "The cross itself - says Father Leopold - was the center of the homily of the mass that the Pope celebrated on September 14. The huge cross placed behind the papal altar has returned today to my parish of Korneewka, in the north of Kazakhstan. In August, a month before the Pope's visit, our Archbishop Tomasz Peta asked us if we could 'lend' the cross to serve the Pope during his visit. Now, it will forever remind us in our remote parish in northern Kazakhstan of the Pope's visit to our country".
The attention on the part of the Kazakh people towards the Pope and his figure grew with each passing hour. As part of the papal trip, a huge icon of Mary "Mother of the Great Steppe" in Kazakh style, made by Dosbol Kasymov, one of the most famous local artists, was blessed.
"When he received the request to make this icon", recalls Father Leopold, "the artist initially had doubts and asked his family what to do. He is muslim. His relatives reassured him and convinced him that it was correct to make this icon. The title of "Mother of the Great Steppe" refers to our shared culture: the steppe as a habitat where many different nations coexist. While the icon was being painted, the artist stated that he realized that this work of art was not created extemporaneously at the time. He had the impression that this image had always been present in his work. The icon has become for him the summary of a lifetime of searching". (EG) (Agenzia Fides, 21/9/2022)

ASIA/INDONESIA - Serving the poor, in harmony with Muslims: living faith in Christ in Indonesia

AMERICA/BOLIVIA - Bishops and laity: "The government should take its responsibilities and respond urgently to the demands of the population"