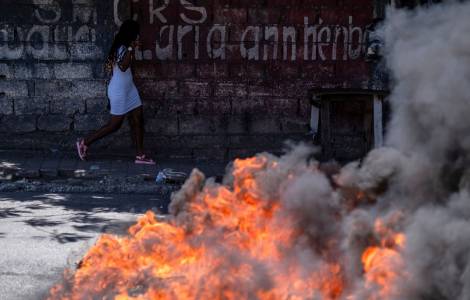 2022-01-13
Twelve years after the earthquake: Redemptorists inaugurate the parish church of St. Gerard after being rebuilt

2021-12-21
"We cannot remain indifferent to the tragic events of recent months": new appeal to international solidarity

2021-12-11
"Believing in life and becoming multipliers of goodness and hope", the Camillians strengthen their missionary commitment

Port-au-Prince (Agenzia Fides) - "Solidarity and full communion in this moment of uncertainty and great pain" to the Jesuit brothers of the Jesuit Migrant Service (SJM) for the attack on one of its homes for migrants, located in Ounaminteh, in the north of Haiti, was expressed by Red Clamor, the ecclesial network engaged in the field of emigration, refugees, trafficking and displaced persons. The structure was looted and destroyed in recent days by a group of people, "in the climate of general chaos that does not end in this suffering country".
"We know the great service you render to the Haitian people, especially to people in forced mobility, victims of growing impoverishment, violence and catastrophes linked to the climate crisis", is written in the message, which highlights: "We are witnesses of the love they feel and of the high appreciation of the overwhelming majority of Haitians for the work you do, these isolated events are the result of despair and the lack of public policies to guide all Haitians along the paths of integral human development, without anyone being excluded from their right to live with dignity".
Red Clamor joins the prayer so that violence may end and the SJM can continue its work in Haiti in full safety of people's property and life. Furthermore, it prays so that the Lord touches the hearts of the perpetrators of violence, who are "victims of the prevailing system in Haiti, which degrades human beings and generates violence".
Once again, in recent days, the Haitian Bishops have launched a cry of alarm on the seriousness of the situation, on behalf of the whole Church present in the Caribbean country: "The situation of poverty and insecurity that is rampant everywhere clearly shows that our state authorities do not have the ability to bring the country back to normal, as it should be done". "The situation is serious, as well as misery. The people need to live and have every right to live with respect and dignity", is written in the document of the Episcopal Conference of Haiti.
The Bishops also denounce some radio hosts, who want to involve the Catholic Church in arms trafficking, threatening to carry out violent acts against church buildings, priests, nuns and collaborators of Catholic institutions. They reiterate that the Catholic Church "is not involved in the arms trade", and ask to "stop sowing confusion among the population. Defamation and slander are serious sins". Once again they specify that the mission of the Catholic Church in Haiti "is to serve all the people in the four corners of the country, in cities and in remote areas. We are engaged not only in the work of announcing the Good News and evangelizing people, but also in the fields of education, health, the promotion of dignity and human rights, social development and all kinds of charitable works, to help the Haitian people not to allow their hope to be stolen, in the midst of a situation of despair and disorder".
For a long time now the Bishops of Haiti have been launching appeals and reminders on the difficult crisis at all levels that the country is going through. Violence and corruption are rampant, the population is in poverty, the natural disasters that frequently hit the island and the Covid-19 pandemic have aggravated the situation, such as political instability, which saw the assassination of the President of the Republic Jovenel Moïse a year ago (see Fides, 8/7/2021). The Church shares the institutional, economic and social chaos that has been affecting the country for years now, and the pain of those who are victims of kidnapping, rape and violence. Priests, nuns and pastoral workers who continue their mission are exposed to violence of all kinds, such as kidnappings (see Fides, 12/4/2021), robberies and assaults. The last missionary to be killed was Sister Luisa Dell’Orto, Little Sister of the Gospel of Charles de Foucauld, killed on June 25 in Port-au-Prince (see Fides, 26/6/2022). Sister Luisa had lived there for twenty years, dedicated above all to the service of street children. (SL) (Agenzia Fides, 21/9/2022)

VATICAN - The Holy See: "surprise and regret" over installation of Chinese Bishop which did not take place in conformity with the Provisional Agreement