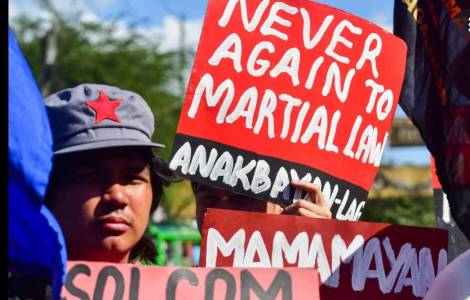 2022-12-05
The "Silsilah" movement: Advent, a season of reconciliation and peace between Christians and Muslims

Manila (Agenzia Fides) - Remembering the dark passages of national history to illuminate the present: with this intention, several schools, Catholic universities and communities in the Philippines today celebrated the 50th anniversary of the declaration of martial law, which General Ferdinando Marcos promulgated on September 21, 1972 and which lasted until 1981. Marcos was then deposed in the peaceful revolution called "People Power" or "Revolution of the Rosaries", in 1986.
At that time, notes Amnesty International, more than 70,000 people were imprisoned, 34,000 tortured and 3,240 killed, while there are no traces of the many political prisoners and "desaparecidos".
Today Catholic institutions exhort students "not to forget, but rather to learn from those painful experiences" that the generation of the "millennials" did not experience directly on their own skin and risks being misinterpreted.
De La Salle University, a Catholic institution based in Manila, organized a meeting in which martial law survivors shared their experiences: "In a time of historical polarization and distortion, the Lasallian community is committed to justice by remembering those who were victims of oppressive regimes. We remain firm in our commitment to protecting democracy, human dignity, the value of life, human rights", said Jose W. Diokno, one of the organizers.
Christine Santiago Rodriguez, a secular leader, said: "Today we commemorate the 50th anniversary of the declaration of martial law in the Philippines. This was a dark day in history, but today is an opportunity to shine the light of truth".
The Sociopolitical Apostolate of the Society of Jesus in the Philippines, together with the "Loyola House of Studies" and other academic bodies related to the religious, held a series of commemorative meetings of the 50th anniversary of martial law, also organizing a photographic exhibition titled "# NeverAgain: The stories of Martial law survivors".
In a statement sent to Fides, the Sociopolitical Apostolate of the Society of Jesus states: "Recalling 13 years of authoritarian government, marked by serious abuses of power, the commemoration of martial law becomes an invitation for us to remain steadfast in our commitment for truth and justice. Our recent experience tells us that we have much to learn and unlearn to do justice to the sacrifices made by our freedom-loving fellow citizens".
Saying that they are in "solidarity with those who have experienced the atrocities of martial law and have become victims of violence and unnecessary suffering", the Jesuits remember "the Filipinos who bravely fought against the authoritarian regime in search of democracy, justice, peace and better life for all". The religious therefore urge "not to be deceived by post-truth narratives that rob our people and not to allow the truth to be buried under lies". Historical revisionism - the note states - must be rejected, impunity and deceit must not triumph.
The appeal ends with a prayer "so that the Filipino people, pushed by the Holy Spirit, may find justice for the perpetrators of the atrocities and take concrete steps towards the healing and reconciliation of the country".
In the Philippines, Ferdinand "Bongbong" Romualdez Marcos Jr, who is the son of the dictator Ferdinando Marcos, was elected President of the Republic in the elections last May and officially took office on June 30, 2022. There is currently a lively debate on the manipulation of the past and on a current of historical revisionism that would like to re-evaluate the era of martial law, covering the violations of human rights that took place in that period. (PA/SD) (Agenzia Fides, 21/9/2022)

AMERICA/CHILE - About 1,500 university students bring Christ's message of joy and hope to 52 locations

ASIA/PAKISTAN - Government and courts crackdown on blasphemy through social media