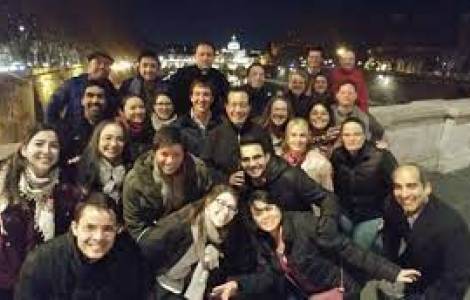 Lima (Agenzia Fides) - The Youth Ministry of Latin America and the Caribbean expresses to "the pilgrim Church of Nicaragua its feelings of closeness and solidarity in these moments when it suffers the harshest persecutions and repressions for its fidelity to the gospel of life, liberty, justice and peace". These are the words of the message that members of the Latin American and Caribbean youth ministry issued at the end of their programmatic meeting, which ended yesterday in Lima, Peru.
The text expresses particular closeness to Monsignor Rolando Álvarez, Bishop of Matagalpa and President of the National Commission for Youth Ministry of Nicaragua, to priests, seminarians and laity, deprived of their freedom, demanding "their immediate release and the normalization of their pastoral activities". Young people are therefore invited "to be builders of the civilization of love, to look with courage towards a more just and fraternal nation", because, according to the apostolic exhortation Christus vivit of Pope Francis, "a young person cannot not be discouraged, his characteristic is to dream of great things, to seek broad horizons, to dare more, to want to conquer the world, to be able to accept demanding proposals and to want to give the best of himself to build something better. This is why I urge young people not to let their hope be robbed" (ChV 15).
Ensuring closeness in prayer, convinced that "prayer in fraternal communion can build peace", the representatives of the Youth Ministry emphasize that in today's society where fanaticism, closed logic and social and cultural fragmentation proliferate, a good politician takes the first step so that the different voices can resonate. Although "differences generate conflicts, uniformity generates suffocation", therefore "we urge the political powers to promote harmony and dialogue with the Church and society".
The last act limiting the free expression of the pastoral activity of the Church of Nicaragua is the prohibition by the national police, "for reasons of public safety", of the processions which were to take place in the town of Masaya at the occasion of patronal feasts in honor of Saint Michael the Archangel and Saint Jerome. In a statement issued by the Archdiocese of Managua on September 17, the faithful of the Patron Saints were reminded that "faith and devotion are a treasure that we carry in our hearts" and that liturgical celebrations will be held in churches. Finally, the intercession of the Saints and of the Blessed Virgin Mary, Mother of the Church and Queen of Peace, is invoked. (SL) (Agenzia Fides, 19/9/2022)