EUROPE/ITALY - The heart of the mission ad gentes: to deepen the phenomenon of migration by moving from “for” to “with” 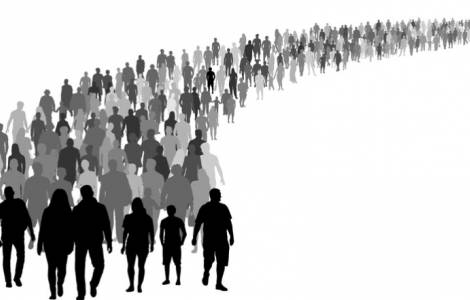 Rome Agenzia Fides) - The phenomenon of migration, in preparation for the World Day of Migrants and Refugees, which will be celebrated on September 25, 2022, was at the center of the meetings for formation and animation of the Sector of the General Missions of the Daughters of Mary Help of Christians (FMA), for the representatives of the provinces of the missions ad gentes and missionaries ad gentes throughout the world. The news reached Agenzia Fides from Sr. Anna Maria Geuna, collaborator of the General Mission Sector of the FMA.
"Sister Ruth del Mora Pilar,
General Councilor for the Missions, and her collaborators have chosen, from the first meetings of the Sector of this sexennium, to interact in a synodal way with the involvement of the sisters and young lay people engaged in the missionary animation of the different provinces and to get as close as possible to the concrete realities of the different parts of the world", explained Sister Anna Maria. So we formed The Global Missio Time, composed of an FMA coordinator of the Provincial Missions ad gentes and a lay person from each continent".
Among others, the director of the migrant office of the Italian Episcopal Conference, Don Gianni De Robertis, sociologist Delfina Lincata and Cristina Molfetta, anthropologist from the same office, participated in the meetings and focused their attention precisely on the issue of migration.
Taking up Pope Francis’s Message for the Day, the Director of Migrantes insisted that migrants and refugees are not the recipients of our charity, they too have an important contribution to make to our society and to the Church. Delfina Licata, reiterated the importance of silent work, tireless dedication, sacrifice made in the face of great obstacles that all missionaries offer the world every day.
"Those who took turns in the various interventions, concludes Sister Geuna, have shown us how fundamental it is to welcome the person into the reality of their life, to understand them in depth.
In his message for WYD 2022, the Pope invites us to a change of preposition, that is to say a different way of dealing with migrants, to move from what we do 'for' them to what we do 'with' them. The passage from 'for' to 'with' in society, as in the Church, in our educational communities, is the heart of our mission ad gentes and of the synodal journey that we follow."
The Church has celebrated the World Day of Migrants and Refugees since 1914. It is an opportunity to show concern for vulnerable people on the move, to pray for them as they face many challenges and to raise awareness of the opportunities
offered by migration. In Italy, the Day is entrusted to the Migrantes Foundation, the Pastoral Organization of CEI (Italian Episcopal Conference) that deals with human mobility. (AMG/AP) (Agenzia Fides, 12/9/2022)