EUROPE/ITALY - Stories, testimonies and reflections on video for Missionary Month 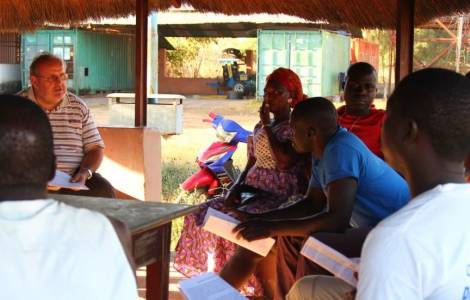 Rome (Agenzia Fides) - There are eight videos of missionary animation developed and distributed by the Missio Foundation (the Italian section of the Pontifical Mission Societies) and produced for Missionary October. These are stories, testimonies and comments on the theme of World Mission Day "And you will be my witnesses!" (Acts, 1,8) which will be published in the next few days.
They are "Lives that speak", as the slogan chosen by "Missio" for the next Missionary October says, those which are told in these videos, preceded by a first video "And you will be my witnesses-lives that speak" filmed in Rome at the Tre Fontane complex in which Father Giuseppe Pizzoli, director of Missio, outlines the theme by referring to the journey of Saint Paul.
"Following in the footsteps of Christ, there is no other way" offers testimonies of Comboni missionaries working in the diocese of Rumbek in South Sudan. The figure of Father Giuseppe Ambrosoli, Comboni missionary, doctor and surgeon, is at the center of the video "the love that speaks, louder than words". After a life spent caring for Ugandans in Kalongo, where he coordinated the hospital from 1956 to 1987, Fr. Ambrosoli became an excellence in the world of health care, and not only in Uganda. The fourth video talks about the foundress of the Pontifical Society for the Propagation of the Faith, Pauline Jaricot, beatified last May (see Fides 23/5/2022). "Pauline Jaricot: young entrepreneur at the service of the faith" retraces the life of this young woman who revolutionized the missionary world. A space is also dedicated to reflections among these 8 videos, the fifth of which is an extensive commentary on the theme of World Mission Day by Cardinal Matteo Zuppi, Archbishop of Bologna and President of the Italian Episcopal Conference. The sixth video, entitled "Dall'Alben alla Cordigliera" (From Alben to the Cordillera), relates the activities of a vast movement of young people who, by managing a refuge in Val Seriana-Bergamo, support missionary projects in Bolivia. In the seventh video, titled "What Akèch says, God listens to it", Nunzia Cocuzza recounts that in a Ugandan village near Kalongo, years ago, she met a little girl called Akech, who could not go to school because she was disabled. It was from this meeting that she launched an activity in favor of handicapped children, which enabled them too to benefit from the right to study. And not only that. The last video, the eighth, is dedicated to the history and activities of the Pontifical Mission Societies. (EG) (Agenzia Fides, 10/9/2022)