ASIA/INDONESIA - "The Church as a community of hope": the presence of Catholics in society 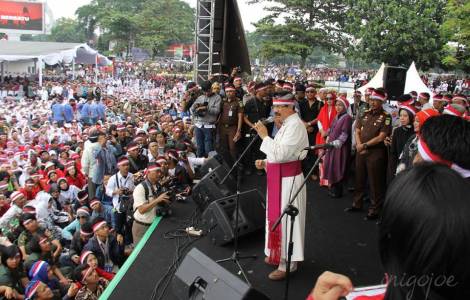 2022-11-23
Serving the poor, in harmony with Muslims: living faith in Christ in Indonesia

2022-11-17
Proclamation of the Gospel and works of solidarity: a popular mission in North Kalimantan

2022-11-03
Resignation and appointment of bishop of Jayapura

2022-10-13
In October, pilgrimages to Marian places flourish throughout Indonesia

Jakarta (Agenzia Fides) - "The Church in Indonesia is committed to being a community of hope, which promotes communion between all components of society", Cardinal Ignatius Suharyo Hardjoatmodjo, Archbishop of Jakarta, told Fides. Among the various ways to promote harmony, the local Church has also chosen a particular "catechesis in pills": in all the parishes of the Archdiocese, he reports, a three-minute catechesis on the social teachings of the Church is carried out before the final blessing of each Mass. Examples cited include those of lay-led Church movements, such as the Let's Go To School Movement, which offers scholarships for economically poor students to study in schools and colleges.
"Caring for our brothers who are poor, suffering or vulnerable is our priority," says the Cardinal.
Msgr. Suharyo promotes in his diocese a vision that is summed up in the expression: "The Church as a community of hope". "We live our faith in community. Inspiring formulas like this one give creativity to announce and live the Gospel", he observes. This approach was also promoted in the Semarang Archdiocese, which the Archbishop led for 12 years in the past, and has now been proposed again in Jakarta.
Everything is developed according to the synodal model of "walking together", which facilitates the proposal to the community of the faithful of the guidelines and key words of the Synod on synodality, "communion, participation, mission".
Following the guidelines of the Federation of Asian Bishops' Conferences (FABC), the Catholic Church in Indonesia cultivates dialogue on three levels: the first is dialogue with other religious groups, especially Muslims, since 87% of the population of the country is Muslim. The second level is dialogue with the poor, considered to be the main mission of the Church. The third is cultural dialogue, recognized as the most difficult in society.
All because, according to the
Cardinal, the greatest challenge of the Church in Indonesia is "to build the Catholic community in Indonesia more in line with 'Gaudium et spes' and social teachings", which encompass presence in public life, business , culture.
In this framework, the Church as a whole invites the faithful to explore and seek creative ways to realize the values of the "Pancasila" (the Charter of the Five Principles of the nation) and to reflect on the social teachings of the Church. The Catholic community in Indonesia, recalls the Archbishop, promotes the motto formulated by Albertus Soegijapranata, the first bishop of Indonesia, which is, for each baptized person, the challenge of knowing how to "be 100% Catholic and 100% Indonesian". (SD/PA) (Agenzia Fides, 3/9/2022)