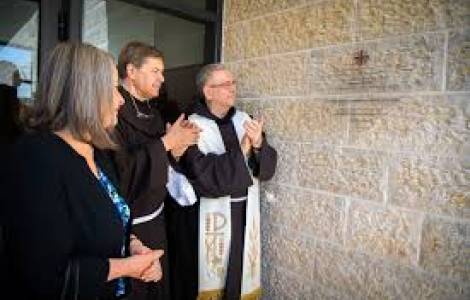 Beit Sahour (Agenzia Fides) - "Shepherds' Field", in the city of Beit Sahour in Palestine is one of the places that commemorate the birth of Jesus. According to tradition, the shepherds who were the first to receive the news from the angels of the birth, which was taking place in nearby Bethlehem, slept here. A small Franciscan sanctuary called "Gloria in excelsis Deo" was inaugurated in this place, which is located in a complex with archaeological excavations. The Pilgrim Center, which is an integral part of a project to create facilities for foreign pilgrims and pilgrims from the local church communities, is intended to offer future opportunities for spiritual retreat in this important place for Christians from all over the world. On the occasion of the inauguration, last August 27th, the foundations of the Chapel of Saint Francis of Assisi and Saint Anthony of Padua, also called the "Palestine Chapel", were blessed.
As reported by the Custos of the Franciscans in the Holy Land, the Shrine was inaugurated by the Custos of the Holy Land, Father Francesco Patton, who was accompanied, among others, by the promoter, Father Marcelo Ariel Cichinelli, and Father Ibrahim Faltas, Vicar of the Custos. Also present at the ceremony were a representative of the Hazboun family of Bethlehem, who financed the construction of the Palestine Chapel, engineer Nayef Gaby Mauge, and the Minister of Tourism and Antiquities of the Palestinian Authority, Rula Maay'ah, who in her speech also highlighted the positive impact of this initiative on the local population in terms of employment and growth prospects of religious tourism in Palestine.
Before the blessing of the foundations of the so-called Palestine Chapel, dedicated to Saints Francis of Assisi and Saint Anthony of Padua, an envelope was presented with coins of various mintings, a cross, the Franciscan Rules, the speech written by the Custos and a sheet with the signatures of those present. A symbolic gesture aimed at leaving a testimony for posterity in case of future archaeological excavations.
The overall project to be carried out in the area also includes the redevelopment of the archaeological area and the construction, in several phases, of ten national chapels.
The workers of the facilities that make a living from Christian pilgrimages to the land of Jesus have suffered greatly economically in recent years as the normal flow of pilgrims has been interrupted due to the Covid-19 pandemic crisis. (GV) (Agenzia Fides, 2/9/2022)

EUROPE/RUSSIA - From Russia to Kazakhstan, on pilgrimage with the Successor of Peter