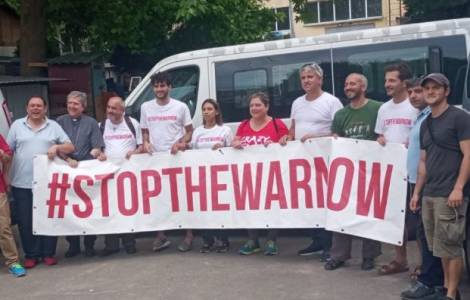 Rome (Agenzia Fides) - "I am leaving for Ukraine to give a witness of solidarity, to cry with those who cry, but also to bring, in addition to the greeting of the Italian Bishops, a message of peace and non-violence and to encourage negotiations and dialogue to end the war. I am happy to do this on the eve of the 60th anniversary of the Encyclical 'Pacem in Terris', which falls next spring; Pope John XXIII wrote it six months after the opening of the Second Vatican Ecumenical Council and in that document the message on war is very clear: 'alienum est a ratione', that is, it is beyond reason ". As explained to Agenzia Fides, Msgr. Giovanni Ricchiuti, Bishop of Altamura and President of the National Council of the international association "Pax Christi" is leaving to reach the places of conflict in the heart of Europe together with the third convoy of "StoptheWarNow", the large Italian coalition which, after reaching Lviv and Odessa in recent months (see Fides, 30/6/2022), is returning to Ukraine, in particular to Mykolaiv, a city on the front line.
The Prelate will join the convoy that left earlier this morning from various parts of Italy by plane for Chisinau, the capital of Moldova. From there he will continue by car to the border, where he will join a convoy of ten vehicles loaded with food and medicines bound for Mykolaiv.
"We don't want to leave the Ukrainians alone and accompany them along the street, even in the most dramatic moments of their lives, when they make their way to the air-raid shelters," explains Gianpiero Cofano, Secretary General of the
Pope John XXIII Community founded by don Oreste Benzi. For three months, some volunteers from the association have been living in the city on the front line, where bombs fall every three to four hours.
Msgr. Ricchiuti knows how difficult it is to travel to places "where war has taken root and where it is difficult to speak of peace. But we must do it", he notes, "because the message of the Gospel is very clear "There are no just wars, no distinctions that excuse conflict. Of course, the situation is complex and this complexity must be understood and respected. But too often in Italy I have heard speeches that excuse war. This also happens in the Catholic world , where instead I would like to see a tension, a passion for the gospel message of peace that I don't see all too often".
The President of Pax Christi adds: "I also had the opportunity to tell the representatives of the political world which side the Church is on: always and in any case on the side of peace. Pope Francis reminded us that not only war is madness, but also the manufacture and sale of arms is problematic. I wonder how many Catholics censor these formulations. These are uncomfortable phrases, just as the position of those opposed to war is always uncomfortable".
Among the 176 organizations and associations of the "StoptheWarNow" network are numerous Catholic groups and communities: These include, among others, Focsiv, the "Fondazione Punto missione", the "Associazione San Vincenzo Abbiategrasso" and many others. The two previous convoys, which were always characterized by a message of peace and concrete solidarity efforts, took place in April to Lviv and in June 2022 to Odessa-Mykolaiv. Another peace initiative will make its way to the Ukrainian capital of Kyiv in September. (MG) (Agenzia Fides, 29/8/2022)

ASIA/MYANMAR - Appeal to young people from the Archbishop of Yangon